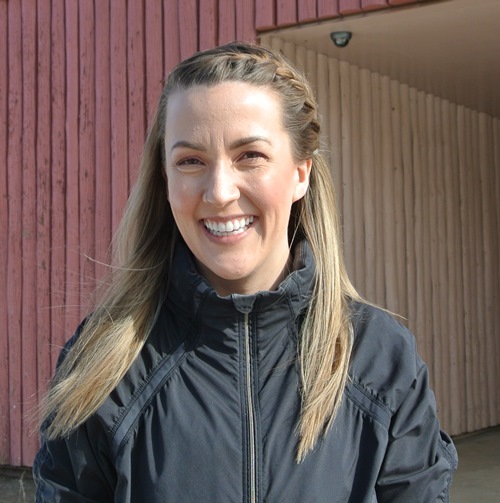 “I am very proud to have been nominated for the Edwin Parr Teacher Award,” said Cattroll. “Ever since I first heard about the award at new teacher orientation in Wabasca I had made plans to achieve the teaching standard required to obtain the award. I think it was important for me to set it as a goal right from the beginning of the year and it certainly has pushed me to achieve my highest potential.”

“Through her fresh and innovative approach to Physical Education and her extensive background in numerous sporting and athletic activities, she has been able to get all students in the school eagerly and happily involved in Physical Education,” said Cardinal. “Through many of her activities, she has been able to promote our cultural and land-based learning philosophies.”

Chelsea introduced land-based learning earlier this year by teaching students how to build a quinzhee. A quinzhee is a snow shelter made by gathering a large pile of snow and hollowing it out. These activities are usually taught when students attend land-based camps sponsored by Kee Tas Kee Now Tribal Council (KTC) and NSD61. Chelsea says she has gained respect and trust of students by attending these camps.

“I think it is very important to understand the culture of the area that you teach in and by attending these camps it has helped me gain a greater understanding of my students and where they come from,” said Cattroll. “Every time I attend these camps the one thing that I value the most is that you build a really great connection with your students at camp because they see you in a different role. I always end up coming home with so much knowledge about the culture and teachings.”Another piece Chelsea believes has helped her this year is feeling part of the community.

“Right from day one Louis [Peerless Lake Local School Board Committee Chair Louis Cardinal] said that I had become a part of the community and to me that was an open invitation and that I should treat Peerless Lake as my new home, not a place where I am just living,” said Cattroll.

“I ended up connecting with people who had a common interest in the outdoors like fishing and hunting and the next thing you know, I was helping clean a moose with a family in the community. Since then people have been inviting me to events within the community and surrounding area. It has also motivated other teachers to come and venture out into the community as well. I believe that in communities such as Peerless Lake, community engagement is very critical for the success of our schools to run effectively.”

Each year, the Alberta School Boards Association (ASBA) honours outstanding first-year teachers representing six zones throughout the province. Chelsea will be recognized at NSD61’s Long Service and Recognition Awards May 4th and at the ASBA Zone One Luncheon in the fall.

“On behalf of Northland School Division, we congratulate Chelsea as the 2017 Edwin Parr Teacher Award nominee for the division, said Gord Atkinson, Superintendent of Schools. “Ms. Cattroll has worked very hard to create a safe and welcoming environment where students feel comfortable to take risks and try new things. She has gained the respect of students, school staff, parents and community members. We are grateful she is part of the Northland family.”

Alberta to fund modernization of Mistassiniy School in Wabasca