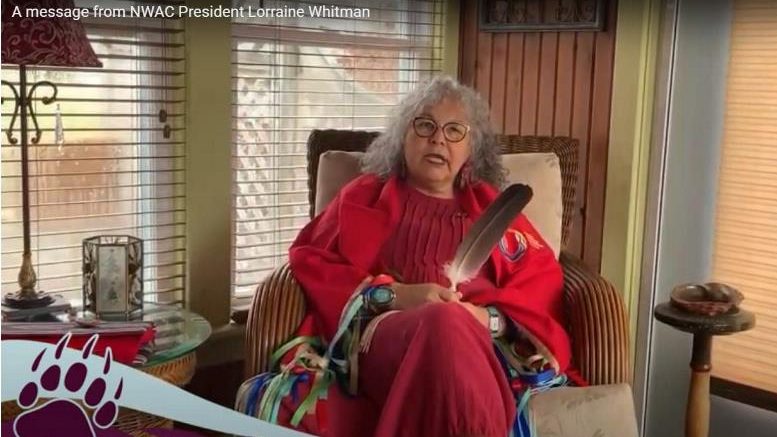 (May 2020) – The Native Women’s Association of Canada (NWAC) says the COVID-19 pandemic puts First Nations, Inuit, and Métis women at increased risk of violence as they wait for the government to respond to the nearly year-old report of the Inquiry into Missing and Murdered Indigenous Women, Girl sand Gender-Diverse People.

NWAC President Lorraine Whitman told a virtual roundtable held on May 7 with Foreign Affairs Minister François-Philippe Champagne and International Development Minister Karina Gould there is an urgent need to implement a national plan for meeting the 231 Calls For Justice issued by the Inquiry’s commissioners – and that the urgency has been heightened by the global pandemic crisis.

“Since the outbreak of COVID-19, the situation of violence has significantly increased for Indigenous women,” Ms. Whitman told the roundtable. “Recently, NWAC undertook a grassroots-level needs assessment and a national survey, which highlighted a striking escalation of violence.”

The report of the National Inquiry was released on June 3, 2019. Carolyn Bennett, the federal Minister of Crown-Indigenous Relations, promised late last year that a national action plan drafted by her government would be made public this June.

NWAC is concerned that the pandemic will delay the government’s response to the critical and violent situation that has been made worse by the arrival of the virus in Canada.

“NWAC has been made aware of the devastating impact of COVID-19 on our sisters, their families and their economic security. Violence has escalated – many have lost their jobs or their businesses, or on the verge of losing them,” Ms. Whitman told the Ministers.

The roundtable with the Ministers was convened to assess Canada’s global response to the pandemic through the lens of feminism and human rights. It was moderated by Jacqueline O’Neill, the Ambassador For Women, Peace and Security.

Ms. Whitman told the Ministers that, while implementing its feminist agenda for peace and security abroad, it must also address all forms of discrimination, violence and genocide at home.

“If COVID-19 has taught us anything, it’s how much change is possible when we act together. I urge us all to continue to do so,” said Ms. Whitman. “Acknowledging and tackling the impacts of COVID-19 on Indigenous women and girls would go a long way to advancing the Women, Peace and Security agenda.”

NWAC is the national voice of First Nations, Inuit and Métis women in Canada and has, for more than a decade, been drawing attention to the issue of the missing and murdered women.

BC Indigenous Leaders, Doctors, Nurses And Others Call For Closure Of Construction Camps