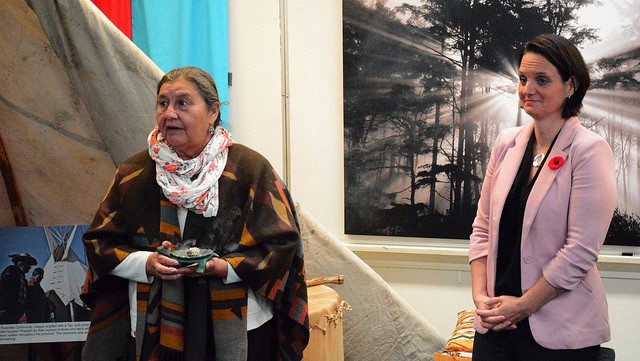 If passed, An Act for Strong Families Building Stronger Communities would fulfil one of 16 immediate actions set out in A Stronger, Safer Tomorrow, Alberta’s four-year public action plan to improve the child intervention system. The action plan focuses particular attention on the safety of the more than 6,000 Indigenous children and youth receiving intervention services from the province.

“For too long, governments have not only failed to put families first, but failed to work closely with Indigenous communities,” stated Alberta Minister of Children’s Services Danielle Larivee on October 31, 2018.

“This new bill would make practical, overdue changes that clarify necessary steps to keep children safe, supported and connected to their community so they can grow into healthy, thriving adults.”

Indigenous communities currently have no formal role in court processes. Under the proposed legislation, First Nations would be automatically notified about all private guardianship applications involving children who are members or believed to be from a particular First Nation.

The new legislation would also close a legislative gap that allows private guardianship applications for children in care under the Family Law Act, without requiring a mandatory home study and cultural connection plan as stipulated in the Child and Youth Family Enhancement Act (CYFEA).

“When Indigenous children are adopted without consideration of culture or placed into guardianship without notice, trust in the system is undermined,” explained Tyler White, CEO Siksika Health. “These changes not only reflect the work of the ministerial panel, they show that the Alberta government is finally listening.”

Other key features of the legislation support the well-being of children by ensuring continuity of financial supports and making culture and safety central to all decision-making.

When a private guardian dies or is unable to continue in their role, children currently lose funding that helps pay for counselling, respite care, transportation and other important services. Under the new bill, those financial supports would follow the child, not be tied to the guardian.

In addition, the legislation clarifies court and caseworker criteria for making decisions in the best interest of the child. Culture is currently listed as one of 16 ‘matters to be considered.’ The new legislation creates a single, clear version of 13 interconnected considerations, with culture being a central theme.

“Throughout the Child Intervention Panel, we heard from Indigenous people that change must occur to ensure children remain part of their culture,” added Peter Choate, Assistant Professor, Faculty of Health, Community and Education at Mount Royal University. “The Truth and Reconciliation Commission has called on us to do child protection differently. These changes increase cultural and familial connection for Indigenous children.”

The legislation would make additional changes, which reflect engagement with Indigenous communities, frontline organizations and stakeholders:

This is the first in a three-phase review of the Child, Youth and Family Enhancement Act. Additional amendments are expected in 2019 after further engagement with Indigenous partners.