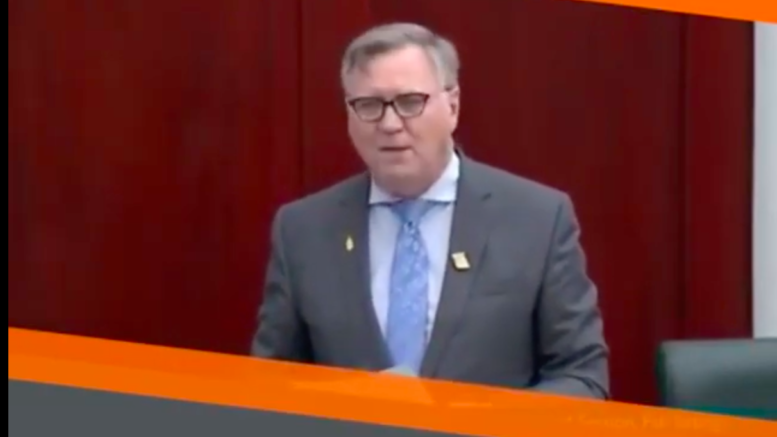 CALGARY — NDP Indigenous Relations Critic Richard Feehan and Indigenous organizations and advocates came together Wednesday to call on the UCP government to include Indigenous genocide in Bill 205: the Genocide Remembrance, Condemnation and Prevention Month Act.

During a committee meeting to review the bill, the NDP opposition members recommended that the bill be changed to include “the atrocities committed against Indigenous peoples by colonialism and including the ongoing murder and disappearance of Indigenous women and girls.”

However, this recommendation was voted down by the UCP MLAs at the committee, despite both the final reports of the Truth and Reconciliation Commission and the National Inquiry of Missing and Murdered Indigenous Women recommended the use of the word “genocide.”

“On an issue as important as this, we should not be divided,” said Feehan. “We should be united in listening to Indigenous voices and moving forward on the path of reconciliation.”

“We are here today to ask the Alberta government to acknowledge genocide has happened, and is still happening, in Alberta and in Canada. Without this acknowledgement and steps to make changes, no attempt at real reconciliation will ever be authentic or true. We must remember, condemn, and prevent genocide,” said Victoria Sedgwick, President of the Awo Taan Healing Lodge Board.

“As they [provincial government] look at the genocide and other issues that have affected Indigenous people across the world and other communities, it is important to recognize that we too must bear witness to the atrocities and the genocide that happened here – and continues to happen here,” said Tony Snow, a member of the Stoney Nakoda First Nation and Indigenous minister for the Chinook Winds Region in the United Church of Canada.

This comes after Kenney hired Paul Bunner as a speech writer and appointed Chris Champion as a curriculum advisor – both have published racist articles against Indigenous peoples.

NDP MLAs have also called on the Minister of Indigenous Relations several times to endorse the language of the National Inquiry report, which specifically names this atrocity as genocide. He has evaded the question every time.

NDP a“The UCP Caucus voting against the amendment for the NDP to include Indigenous genocide is actually willful denial of genocide. I call on the UCP government to not just include the term genocide, but also to educate their staff, educate their caucus, and educate their ministers,” said Michelle Robinson, co-chair of the MMIWG2 Committee Calgary.