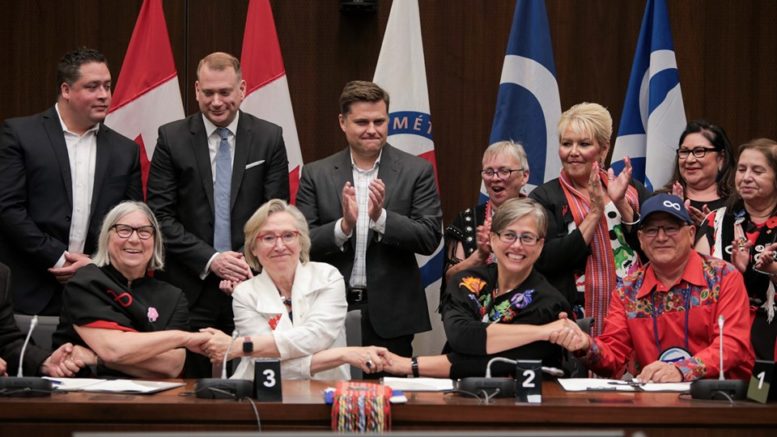 Self governing agreement was signed with the Metis Nation of Alberta on June 27, 2019. (Photo from Minister Carolyn Bennett's post)

(Ottawa, Ontario) – On June 27, 2019, after over 90 years of perseverance and struggle, the Métis Nation of Alberta (MNA) signed the first ever self-government agreement between the Government of Canada and a Métis government.

The Métis Government Recognition and Self-Government Agreement (the “Agreement”) was signed by MNA President Audrey Poitras, MNA Vice President Dan Cardinal and the Honourable Carolyn Bennett, Canada’s Minister of Crown-Indigenous Relations, in a special ceremony held on Parliament Hill. The MNA Provincial Council, Elders and youth were also in attendance to witness this historic event.

With the signing of the Agreement, Canada formally recognized that the Métis Nation within Alberta, as represented by the MNA, holds the inherent right to self-government. No other self-government agreement between Canada and an Indigenous nation provides for this kind of upfront rights recognition.

In addition, the Agreement clearly defines a process for the MNA and Canada to implement the agreement that will recognize Métis jurisdiction and law-making power in core self-government areas such as citizenship, leadership selection, and governmental operations. It also sets out a process for the negotiation and recognition of additional powers (for example, language, culture and heritage, education, housing, environment, and others).

The Agreement lays out the following next steps for its implementation: the negotiation of a fiscal and intergovernmental agreement; the approval of a constitution for the Métis Nation within Alberta by MNA citizens; the development of a transition plan; and the passage of federal recognition legislation.

“Our ancestors, who shared Louis Riel’s vision for the Métis Nation to be self-governing and independent within our Homeland, tirelessly built the MNA as their self-government over the generations,” said MNA President Poitras.

“Now, after 90 years of perseverance and struggle, the work of our ancestors and the goal of our citizens has been realized: formal recognition of our Métis government here in Alberta. It’s a great day for the Métis Nation within Alberta.”

The MNA was first established in 1928. While it has always been the MNA’s position that it is already the government for the Métis Nation within Alberta, it was forced to use Alberta’s Societies Act to create a non-profit association in order to establish a legal entity recognized by other governments and third parties. The MGRSA sets out a clear process that will transform the MNA into a recognized Indigenous public government. This will require the MNA’s citizens to adopt a constitution, among other steps.

“Now the hard work begins,” said Vice President Dan Cardinal. “Our citizens have called for our government to have a constitution for generations. Now we can build a constitution for the Métis by the Métis. This will require a province-wide referendum by our citizens. That is self-determination in action. Our citizens will have the power to make the decisions that matter most to them.”