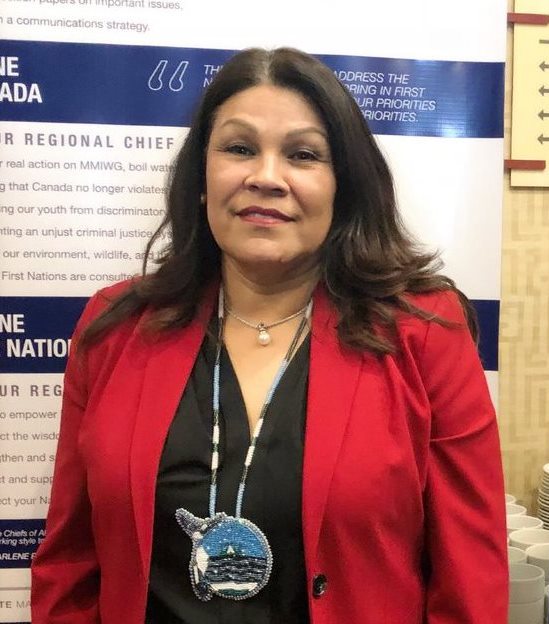 (ANNews) – On Thursday, February 22, 2018 Alberta’s First Nations Chiefs met in Edmonton and cast their ballots in an election that determined who would replace outgoing AFN Alberta Regional Chief Craig Makinaw as their spokesperson and representative in Ottawa for the next three years.

Marlene Poitras, a member of the Mikisew Cree First Nation, won the election on the second ballot and in doing so became the first woman in the organization’s 40-year history to hold the prestigious post. Poitras was nominated by Kehewin First Nation Chief Brenda Kehewin and seconded by Treaty 8 Grand Chief Rupert Meneen. She was inaugurated by Alberta’s Chiefs and by National Grand Chief Perry Bellegarde as the Assembly of First Nations Alberta Regional Chief during a ceremony in Edmonton on March 19.

Recently named the Chair of the Alberta Government’s First Nations Women’s Council, Chief Poitras has a background in nursing and has worked in the political arena for most of her adult life. She is the first Treaty 8 candidate in 15 years to hold the post as Alberta’s Regional Chief. 39 Chiefs voted in the election, including many from Treaty’s 6 and 7. She noted that her experience in the political arena over the years has enabled community leaders from across the province to get to know her.

“I’ve always worked in the political arena,” she said during a recent interview. “The Chiefs know my ability and my integrity and I am honoured that they chose me to represent them. About two-thirds of those who voted supported me. I was quite surprised to win on the second ballot but I am pleased that I did.

“I think it’s just about time for a woman to step into this role, into this important position and I am very pleased to have the opportunity to help bring about positive change in our communities.

“We are a matriarchal society and both historically and traditionally women have been key role players in looking after and raising our children, maintaining the home fires while our warriors gathered our supplies and hunted for our food. Our women groomed the leaders of tomorrow and when trouble was near it was the women who stepped up and got involved.”

When congratulating the new Alberta Regional Chief on her election victory National Chief Bellegarde said he was looking “forward to working with Regional Chief Poitras, who is a strong advocate for First Nations rights and Treaty rights. Mrs. Poitras has spent most of her career working with First Nations and the broader Indigenous community across Canada and internationally. We look forward to her important contributions as a member of the AFN Executive Committee.”

Since the election, Poitras noted, “Women from across the country and beyond have contacted me and wished me well.

“There are many, many issues we have to deal with in the months ahead and most of them are crucial, even critical. I will leave it up to the Chiefs to set the list of priorities; each area and each community has its own and we must work together to improve such things as health, employment, poverty and housing shortages.

“Children’s health and well-being is a big concern and one that I will encourage every Chief to focus on. Our young people are the future and it will be up to them to carry on and add to what we’ve been able to accomplish. They’re the ones that are going to protect our sacred treaties. I hope to be an inspiration to them, to encourage them and inspire them to stand up and be positive and do things that will help the community and the people within it.

“I will be meeting with all of Alberta’s Chiefs during the next couple of months and together we will sit down and come up with a plan, a strategy for tomorrow and for the days to come. I will be looking for a strong mandate from the Chiefs; together we will meet our goals.”

Treaties are among the main issues of concern to the new Regional Chief. She wants to ensure that treaties are respected by both the provincial and federal governments and by industries and developers seeking to work within treaty territories.

“The sacred and spiritual intent of the treaties is that we were supposed to live in peaceful coexistence and share the land, and that never happened,” she said.

“I’d like to see more progress when to comes to honouring our treaties.”

Poitras has served on several AFN committees; she was the CEO (1996-2003) for the Athabasca Tribal Council for seven years; served the AFN (2003-2010) as the Director of the Bilateral Process w/Treaty 8 and has dedicated her life to improving the stead of Indigenous peoples everywhere. In 2011 Chief Poitras was the Director of the Inskim Centre at Calgary’s Mount Royal University. In 2015 she was the recipient of the Aboriginal Humanitarian Role Model Award of Alberta. She has worked with Treaty 6, 7, and 8 organizations, communities, and the Elders in addressing issues related to the sacred treaties. She has also worked with all three levels of government and has vast experience when it comes to negotiation and understanding the full scope and significance of ongoing resource development.

“Nation-building,” noted Poitras, “is another area that I will focus on. Our communities need to have the capacity to start developing their Nations as sovereign entities. The new legislative framework announced by Trudeau (two months ago) will certainly be looking at the Indian Act.

“Some Chiefs would like to get rid of the Indian Act, but, you know, many people at the grassroots level think that the Act has enabled our survival and don’t want to get rid of it. I think it needs to be looked at to see if there is anything beneficial to the Nations. That review and scrutiny needs to happen sooner than later but it is paramount that the Chiefs are involved. They need to be at the table to make the decisions about what is and what is not beneficial to their communities.”

Regional Chief Poitras said her role isn’t to make arbitrary decisions but instead to “facilitate discussions, to introduce conversation and ensure that the Chiefs are getting all of the information they need to make informed decisions. My role is to keep the Chiefs apprised of what is going on so they have a better understanding moving forward. In the past there have been some issues regarding the flow of information and in some cases the Chiefs haven’t been involved because they hadn’t been kept informed. I intend to ensure that all information is passed on to the Chiefs.”

Chief Poitras is also working with the AFN’s National Youth Council to ensure that information gets back to the communities and that all youth have the opportunity to understand what is going on throughout Alberta’s First Nations communities.

First Nation leaders (Chiefs) from coast to coast to coast direct the work of AFN through resolutions passed at Chiefs Assemblies held at least twice a year. The AFN National Executive is made up of the National Chief, 10 Regional Chiefs and the chairs of the Elders, Women’s and Youth councils. Regional Chiefs are elected every three years by Chiefs in their regions. Chiefs, who are elected by the citizens and members of their respective communities, elect the National Chief every three years.

The role of the National Chief and the AFN is to advocate on behalf of First Nations as directed by Chiefs-in-Assembly. This includes facilitation and coordination of national and regional discussions and dialogue, advocacy efforts and campaigns, legal and policy analysis, communicating with governments, including facilitating relationship building between First Nations and the Crown as well as public and private sectors and general public.

There are 634 First Nation communities in Canada, with First Nation governments.  First Nations are part of unique larger linguistic and cultural groups that vary across the country.