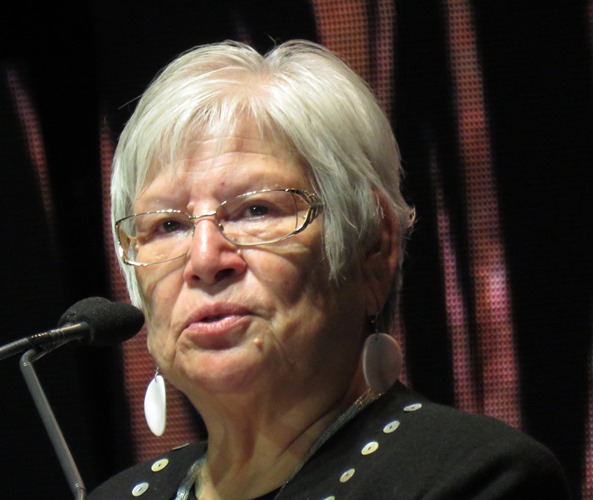 (ANNews) – Pope Francis is expected to visit Canada this summer. No, formal announcement has been made as of yet but the pope is expected to make at least three stops for Canada’s Indigenous populations. Alberta Native News plans to get perspectives from Indigenous people on what this all means with regard to reconciliation with the various churches in Canada that operated Canada’s Residential Schools.

In an interview with Chevi Rabbit from Alberta Native News, Marilyn Buffalo talked about healing and the role of a church in reconciliation.

“From my point of view, I think there’s a lot of healing and fixing the past needed for us to move on,” said Marilyn Buffalo, CEO of Nechi Institute, referring to the victims and the families of residential school “students.”

“Due to the unhealed trauma and family loss that has taken place over many generations.”

“People fall into addictions for many reasons,” she added, “and the number one reason is unresolved trauma, family abandonment, and displacement.”

When it comes to the issues of trauma and intergenerational trauma caused by the multitude of church-run schools, Buffalo explained that there needs to be more resources and initiatives for healing. But, most importantly, they have to be Indigenous-led initiatives.

“We’re talking about Anglicans, Catholics, United Church, Lutherans, all these different faiths have, I think, a moral, spiritual and legal responsibility to help fix the problems,” said Buffalo.

And these reconciliation efforts by the churches must be Indigenous-led, but they also have to come from a traditional Indigenous thought process, she added.

“The churches have a responsibility to help rebuild: number one, the languages. Because don’t forget we were forbidden from speaking our languages; for many generations, we lost our languages,” said Buffalo.

“Because of the loss of language, we lost our culture. So the social and Indigenous fabric has now been lost, and we have to rediscover it. And we have to work together to reestablish individuals, families, and then Nations,” added Buffalo.

Buffalo agrees that we cannot get away from saying that the Church was responsible for destroying the social, economic, and spiritual life of Indigenous communities across Turtle Island.

“I’m a survivor. I experienced that from early childhood and onwards. We often ask ourselves, why did we survive; how did we survive? What happened?” said Buffalo. We are here to stay, she said resolutely.

“And there’s a lot of work to be done to rebuild our nations.”

Not just the Catholics but all faith communities across Canada need to relearn their true history, she added. First comes truth, then reconciliation.

You look at all the TRC calls to action and start from there, she said.  There are decades of work and research already done.

“It’s not like we have to reinvent the wheel. It’s all there in the TRC calls to action,” said Buffalo.

“Part of that is a humbling process – humble yourself, and each individual has to decide how they’re going to reconcile and how they are going to participate in the healing process. Everybody has a role to play in Canada. It’s not just us First Nations,” said Buffalo.

“I didn’t do anything wrong. I was only a child,” she emphasized.

“I think there has been enough talk about healing; let’s do the healing. And they need to start listening and learning.”

“We help guide people in how to heal, and many of the people who graduated from Nechi Institute are now working in the communities. We have over 15,000 graduates across Canada.”

“Many people who started at Nechi now are in different positions and professions. Some have become doctors, lawyers, nurses, and teachers and higher-level educators. They all started at Nechi Institute.”

Buffalo added that a lot of people involved with the National Native Alcohol and Drug Abuse Program (NNADAP) are graduates of the Nechi Institute.

They are doing the work and paying it forward. The NNADAP is an example of a Health Canada program now largely controlled by First Nations communities and organizations. Since its origins in the 1970s, the program’s goal has been to help First Nations and Inuit communities set up and operate programs aimed at reducing high levels of alcohol, drug, and solvent abuse among on-reserve populations.

Buffalo explained that Indigenous people know how to heal, “but we need the resources and tools… Nechi Institute needs a new building because we are sitting on top of graves… unmarked graves. And the churches have a lot of properties and facilities within the city of Edmonton that are sitting empty.”

Buffalo said an act of reconciliation that Canadian Churches could provide is Church-owned properties for Indigenous Initiatives. “We have these programs and services that need real estate in different cities,” she explained.

Buffalo praised recent the announcement from Winnipeg that the Hudson’s Bay Company was giving its prime downtown real estate to the Southern Chiefs’ Organization for reconciliation initiatives.

The space will be turned into 300 affordable housing units, a child care centre, a museum, an art gallery, and restaurants with both the provincial and federal government also providing funding toward the Initiative.

Whatever the Church decides to do, it’s got to be meaningful, said Buffalo. It can’t be just more talk. It has to be a significant action, and we must be treated as equal partners in negotiating a concrete action plan.

“Because we know how to do that work. Culture is treatment. People learn their culture, and you know this yourself (referring to yours truly). You come from a traditional family.”

“Culture is treatment, ” she concluded.

“People will stay sober once they know their culture and practice it in their daily lives.”