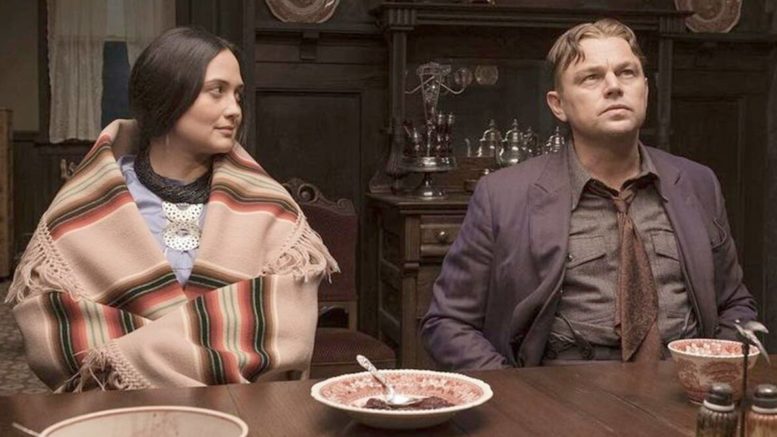 Killers of the Flower Moon is expected to release next year. (Photo: Apple TV/Instagram

Killers of the Flower Moon stars Leonardo DiCaprio, Jesse Plemons, Lily Gladstone (whose father was a member of the Kainai Nation in Southern Alberta), and Robert De Niro.

The film is based on the book, Killers of the Flower Moon: The Osage Murders and the Birth of the FBI, by American Journalist David Grann. It was released in 2017 to critical acclaim as it was listed by Time Magazine as one of the top ten non-fiction books of the year.

The book chronicles Osage County, Oklahoma during the 1920s when the Osage Nation were granted the right to profit from oil on their lands.

At least five per cent of the Osage Nation were then assassinated during this period and more than 50 per cent of the Nation lost their wealth due to greedy settlers trying to gain their petroleum and mineral rights.

This brutal period was known as the Osage Reign of Terror.

This time in history was crucial in the creation of what the United States is today as the FBI, which had just been created, investigated the murders. They uncovered a conspiracy curated by William Hale to kill an Osage Nation Family by using guns, bombs, and poison — which aided in legitimizing the Federal bureau.

Scorsese, who is coming off the critical success of The Irishman, said of the book, “What really got to me was the intrinsic sense of evil. What is it in us that makes us capable of committing these acts of evil.”

Osage Nation’s Principle Chief, Standing Bear, has said that a copy of the book is given as a required reading to anyone attempting to do business with the Nation.

“My great-grandfather, Fred Lookout, was Chief during that time,” Standing Bear said. “He hired outlaws — men who wouldn’t hesitate to kill — to protect our family… The world does have evil places and evil people. The biggest crime is complicity. Almost everyone went along with the murders.”

The film is currently in production and is working closely with the Osage Nation for aspects of culture, history, and language.

In 2019, Scorsese and other production members met with Chief Standing Bear at the Osage Nation campus to discuss the involvement of the Nation in the film’s production.

“We want to make sure your people have everything they need, in terms of Osage artisans, Osage language … those people are still here in the community and would love to help,” Standing Bear said. “We are very thankful you are here and that you are willing to tell this story.”

The film is being produced by Apple Studios and there is no current release date set for the film.