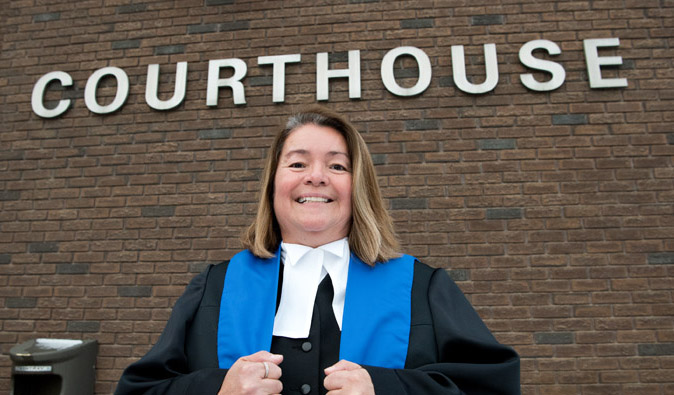 YOUR HONOUR — Newly appointed Judge Cheryl Arcand-Kootenay shows off her official judges robes outside the St. Albert courthouse. A St. Albert resident, Arcand-Kootenay is the first female from Treaty 6 and the first Alexander First Nation member to become a provincial court judge in history. She will be based out of St. Paul.

(ANNews) – On May 26, 2021 the Department of Justice Canada announced that the Honourable Cheryl Arcand-Kootenay, a nehiyaw iskwew (Cree woman) from Kipohtakaw (Alexander) First Nation in Treaty 6 Territory, is going to be appointed to the Justice of the Court of Queen’s Bench of Alberta.

The Honourable David Lametti, Minister of Justice and Attorney General of Canada, made the announcement in a press release, saying “I wish Justice Arcand-Kootenay every success as she takes on her new role. I am confident she will serve the people of Alberta well as a member of the Court of Queen’s Bench.”

Prior to her appointment, Arcand-Kootenay was a judge of the Provincial Court of Alberta in St. Paul. She graduated from the University of Alberta in 1988 with a Bachelor of Arts in political science and then a Bachelor of Law degree in 1992. Arcand-Kootenay is currently completing her Masters of Law in Dispute Resolution at Osgoode Hall Law School.

Before her role in the Provincial Court of Alberta, Madam Justice Arcand-Kootenay practiced primarily in the areas of child welfare and Aboriginal law.

At the Superior Court level, more than 450 judges have been appointed since November 2015. Of these judges, more than half are women, and appointments reflect an increased representation of visible minorities, Indigenous, LGBTQ2+, and those who self-identify as having a disability.