As Indian Act chiefs gathered in Winnipeg this month to select the Assembly of First Nation’s next national Chief, the grassroots Idle No More movement marked its second anniversary.

Two years ago, Idle No More burst onto Canada’s political scene as a celebration of Indigenous spirit and an expression of mass anger at the Harper government’s attacks on Indigenous and Treaty rights, its dismantlement of environmental protections and consultations, and its indifference to the plight of murdered and missing Indigenous women. 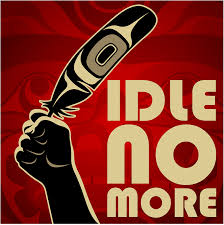 Although First Nations chiefs live under threat of Ottawa’s fiscal bullying and retributive funding cuts that target their already underfunded and impoverished communities when they dissent, many chiefs found courage in the power of the movement and have joined hands with Idle No More. Others, however, were assuaged by Harper’s promises of more money and sham talks that went nowhere and excluded grassroots Indigenous voices.

This Assembly of First Nations election took place in the wake of the Supreme Court’s historic Tsilqhot’indecision recognizing Aboriginal title and control of resources on traditional territories where title has not been ceded. In response to that decision, the federal government has hastily proposed the first major overhaul of the comprehensive land claims policy since the 1980s, under the auspices of Ottawa’s designated pipeline fixer, Douglas Eyford. The objective of the government’s “new” policy is to bury the gains of the Tsilhqot’in decision and double down on the failed existing policy that has produced only a handful of self-termination agreements in 20 years and left hundreds of bands deep in debt for legal costs—all because the government will not budge on extinguishment of Aboriginal title, which is in violation of Indigenous laws and unacceptable to the vast majority of First Nations.

“While Stephen Harper’s government continues to bulldoze Indigenous lands and rights in its obsession with making Canada a resource colony to the world, the AFN has not even put the historic Tsilhqot’indecision or the government’s major new comprehensive claims policy on its agenda,” said Sam McKay, Defenders of the Land spokesperson. “Many chiefs are sitting at termination tables negotiating the extinguishment of their title and rights, and the AFN leadership does not seem to have any strategy to protect our Peoples’ rights or use the opportunity Tsilqhot’in has given us.”

“The only major policy initiative the AFN is pushing at this assembly is the government’s rehashed First Nations education legislation that will subordinate First Nations’ schooling to Ottawa’s dictates and further alienate our young people from their cultures,” said Janice Makokis, of Idle No More.

“Our communities must take their future into their own hands,” said Idle No More organizer Sylvia McAdam. “Only through movements like Idle No More, bringing together grassroots Indians living on reserves, urbanized Indigenous People, sympathetic chiefs, councillors, and traditional leaders, and our non-Native friends can we find the power to challenge Canada’s termination plan and protect our rights and identity for future generations.”

“Idle No More and Defenders of the Land call on the Chiefs of the Assembly of First Nations to join our ‘Turn the Tables’ campaign to confront the Harper government’s renewed efforts to terminate Aboriginal title and rights and assimilate Indigenous Peoples in Canada.”

by Idle No More Communications