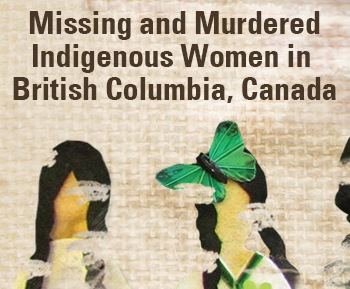 “We commend this esteemed international body for looking into the disturbing and disproportionate issue of missing and murdered Indigenous women and girls in Canada, and in particular British Columbia,” said Cheryl Casimer of the First Nation Summit (FNS) political executive. “The IACHR report clearly acknowledges what Indigenous people in this country have known all along, that this issue is not just a result of criminality but is also rooted in, and a result of, the historical and systemic socio-economic discrimination faced by Indigenous women and girls across this country. Any solution must include a detailed examination of all contributing factors. As the report states, addressing violence against women is not sufficient unless the underlying factors of discrimination that originate and exacerbate the violence are also comprehensively addressed.”

“We fully support the findings and recommendations of the IACHR and encourage the federal and provincial governments to do so as well,”  said Robert Phillips of the FNS political executive. “We question how much longer the Harper government can continue to ignore the calls for a National Inquiry into the issue of missing and murdered indigenous women and girls across Canada given the findings and recommendations of this recognized and respected international body. We cannot continue to stand by and accept band aid solutions while week after week, more Indigenous women and girls are added to the growing list of those missing or murdered,” added Phillips.

“We must stand together and recognize that this is not an “Aboriginal” issue, but a Canadian societal issue that should be of concern to all Canadians and that will require a coordinated response by all governments and First Nations alike. The First Nations Summit will continue to push for justice and a sincere effort to protect, Indigenous women and girls across Canada, who are some of the most vulnerable in Canadian society,” concluded  Casimer.

The First Nations Summit has been one of countless Aboriginal organizations that have continually called on the Harper Government to establish a full public inquiry into the deep and disturbing issue of missing and murdered aboriginal women across Canada.
The IACHR report comes as the Assembly of First Nations (AFN) and other Indigenous peoples’ organizations and Indigenous women’s families are preparing for a National Roundtable on Missing and Murdered Indigenous Women with the provinces and territorial leaders to be held in Ottawa February 27, 2015.

AFN National Chief Perry Bellegarde made the following statement: “On behalf of the Assembly of First Nations, I wish to thank the IACHR for its work and for so clearly identifying the critical failure of governments and policing across Canada to meet their obligations under international and regional human rights law to guarantee equality, by failing to exercise due diligence in preventing and responding to violence against Indigenous women and girls. The IACHR has concluded that the response of governments in Canada to date to this national crisis amounts to a violation of the right to life for Indigenous women and girls. We must act together to establish both a national inquiry to examine these critical human rights failings and move at the same time to put in place a national action plan informed by the guidance of the IACHR and other human rights bodies. I also wish to express our support and thanks to the AFN Women’s Council, the Native Women’s Association of Canada, the many individual Indigenous activists and advocates, and most importantly, the families of victims who have been a voice for missing and murdered Indigenous women and girls in Canada.”

The IACHR report entitled Missing and Murdered Indigenous Women in British Columbia, Canada supports what Indigenous peoples have been saying to federal and provincial/territorial governments for some time – that the vulnerability and victimization of Indigenous women is not only a criminal justice issue but represents a much larger problem of discrimination and continuing impacts of colonization. Appropriate responses therefore must respond to the contemporary reality of colonization and discrimination as experienced by Indigenous women and girls, their families and communities. This includes a national action plan that responds to the negative impacts of the Indian Act and other imposed federal legislation targeting First Nations peoples, explicit and systemic discrimination in many forms affecting indigenous women and girls, the aftermath of the Indian residential schools system and institutional and structural inequalities.

“Addressing violence and achieving safe and thriving communities is a key priority for First Nations across Canada,” said AFN Regional Chief Cameron Alexis who leads the work for the AFN national executive on addressing and ending violence against Indigenous women and girls. “First Nations will continue to do all we can to address and prevent violence against Indigenous women and girls, but we need direct response and action from all levels of government as well. The police have a major role to play and must be responsible and accountable but this is not just about policing, it must also be about prevention. This report underscores the need for a national inquiry that would examine root causes, identify and address these long-standing, systemic issues that make our people more vulnerable to violence.”

The 153 page report and its recommendations provide guidance in moving forward to establish a national inquiry to examine issues and collect the missing data and compile statistics on the scope of the problem and to establish, at the same time, a preliminary action plan to begin addressing the systemic discrimination that lies at the heart of this national tragedy. A comprehensive national action plan must be developed and implemented based on direction from First Nation communities and leaders and inclusive of the voices of the families of missing and murdered women and girls. The report notes that greater education and accountability are required for law enforcement, the justice system and social services.

“We are currently planning for a National Roundtable on Missing and Murdered Women together with other Indigenous organizations and the provinces, territories and federal government that we expect to take place February 27, 2015 in Ottawa,” said AFN Women’s Council Co-Chair Therese Villeneuve.