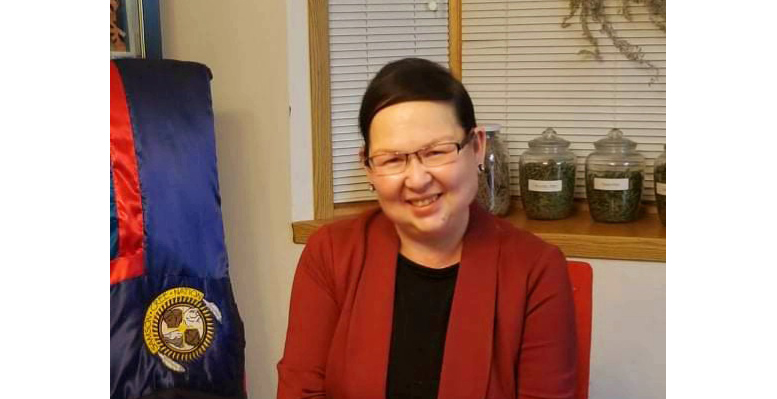 (ANNews) – For the past two decades, Maskwacis resident Luci Johnson has been helping Indigenous people navigate through the justice system.

As a reporter for Alberta Native News, I’ve had the unique opportunity to witness Johnson in her element as a community court worker. I’m currently covering the developments of two high-profile cases of missing and murdered Indigenous women – Chantel Firingstoney and Billy Johnson.

In both cases, I’ve observed Johnson guide, assist and console the families in their darkest moments. Her work is clearly vital for families of missing and murdered Indigenous women.

This year Johnson’s role as a court worker in Alberta’s Justice system was recognized by Jennifer Nepoose – who nominated her for the Alberta Restorative Justice Association’s “George Brertton Award.”

In her award submission, Nepoose states, “Over the years, Luci has been instrumental in developing many justice-based initiatives for her community.

“She has been a valuable resource for bridging the Western judicial system with Cree cultural beliefs, using restorative justice, and involving elders in youth community service activities relating to conditions arising from extrajudicial sanctions.”

“Luci is well regarded and respected by the Crown, lawyers, and judges who call on her to assist individuals to get access to resources and programs in the community,” said Nepoose.

In my interview with Johnson. Her message was simple, “Stop over criminalizing our Indigenous youth and young adults.”

She explained that every Indigenous person that enters the courtroom has a price tag attached to them. “There is a dollar figure to that individual,” she reported.

“Over the years, I have seen and heard a lot from our people in the Justice System.”

In her role, Johnson provides culturally appropriate support and helps Indigenous people navigate the court’s system and connect to resources.

She also plays an important role in ensuring victims and families are connected to services and other community-based resources, such as those for families of missing and murdered indigenous women.

She explained that as a frontline court worker she starts from the very beginning of the case when some are charged and follows along as they move through the Justice System.

Her social media is now an extra tool that helps her effectiveness as a front-line worker. “I receive messages on Facebook during a time of crisis,” she explained.

Johnson said many things need to be done collectively and difficult conversations need to happen on topics such as: family violence, the breakdown of families, male violence, poor parenting skills, lack of life skills, single young parents, and poverty issues. “There are many children in the community who are hungry,” she noted.

She said there is a serious lack of housing causing major issues in communities for our young families and our young adults.

At the Nation level, she said that there is a growing number of children in the child welfare system. “1100 kids in care in my Nation alone,” she said. “What happened to my community?”

She said that three main areas need to be addressed. First, the assumption that Maskwacis is wealthy needs to be dispelled. “It’s been a good 20 years since we have had that kind of money…The mega-money we once had is gone, all those funds are gone and now First Nations bands can’t keep up with the demand of a growing nation,” explained Johnson.

Secondly, many members have lost or never learned cultural respect as Cree people.

She explained that Cree “Warrior men” are not supposed to abuse Cree “Life Carriers.” The “Life Carriers” give Cree people the legacy for the next generation.

“People need to sit down with their kids and talk about these issues. We need sit down and have these difficult conversations with our next generation,” said Johnson.

Thirdly, “Our youth and young adults are idolizing other cultures.” She would like to see a revitalization of Cree culture with our communities.

She explained that every time she goes into a courtroom there is a high probability that the case involves drugs, alcohol, or gang activity.

She shared a story on toxic masculinity and gun violence. “This past year I had to support a young lady who witnessed gun violence in her family. A family member was acting macho. He didn’t realize the gun went off and he shot and grazed a two-year-old child.”

“There is a huge disconnect within families,” said Johnson.

“We have programs and services available in the community that are tied to culture.” These programs are often under-utilized.

Johnson explained that Cree people had a community system that dealt with members who committed crimes in the community. Cree people had restorative justice. “Elders would get together, and they would discipline the member who was acting out,” said Johnson.

“Back then if a male was committing sexual violence against women in the community, one of his braids would be cut off. This way community members would  know to stay away from him.”

Johnson’s message is for community members to think about the next six generations and remember the important role of women in society.

Luci Johnson’s community service extends to many boards and committees, including Alberta Health Service’s Wisdom Committee for Indigenous Health. She has received many accolades including the 2018 Alberta Solicitor Community Justice Award for service enhancement, Esquao Award, Girl Guides of Canada award, Alberta Youth Justice Award. She is highly respected and continues to make a positive difference for Indigenous people in the justice system.