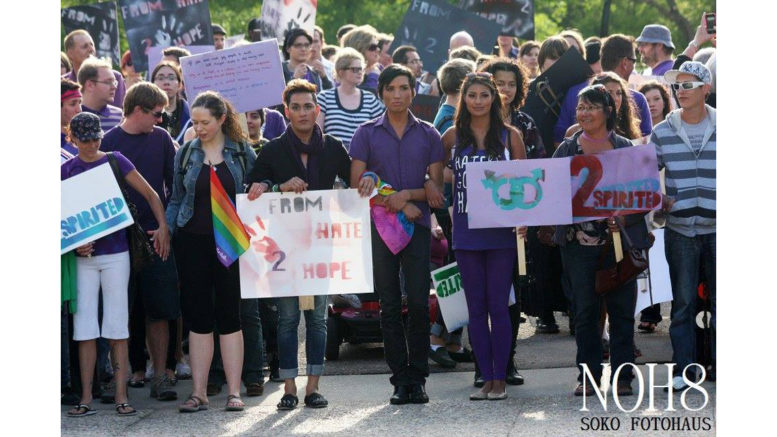 Alberta Native News Reporter and Advocate Chevi Rabbit and others at the first ever Hate to Hope Rally in 2012. (Photo supplied).

“It’s an idea where the world is mutually respectful to each other and equality is not only strived for but achieved,” Rabbit said.

The group has organized 35 awareness campaigns over the past decade, she added.

The most recent campaign is “Heal the Divide,” which was created as a response to the anti-vaccine protests and convoys that were held across the country and Edmonton Police Service Chief Dale McFee’s call for people to tone down divisive rhetoric.

Georgina Lightning, who has spoken at Hope to Hate’s annual event numerous times, was born and raised in Edmonton before moving to Los Angeles in 1990 to pursue a film industry career.

She said she first connected with Rabbit through the Idle No More movement.

“I’m a storyteller, and all of my body of work, the characters that I portray on screen and film, are all Indigenous–related. They’re all trauma–based [and are] about breaking cycles of trauma. They address trans-generational trauma,” Lightning told ANNews.

“I am very familiar with diversity [and] adversity. Being one of those people that’s always the minority in the group, the disadvantaged, non–inclusivity was the model for 30 years in Hollywood.”

She described the United States and Canada as still being at war with Indigenous peoples.

She suggested Edmonton is the ideal city to break this mould.

“Edmonton, Alberta is such a multicultural society. People from all walks of life live there, as they should. It’s a shared land so we should all be respecting and honouring each other. There’s so much we can learn from culture. Culture is the most beautiful thing in the world and it’s rooted in spirit,” Lightning said.

Rachel Manichoose said she got involved with Hate to Hope through her advocacy work for Missing and Murdered Indigenous Women and Girls and vulnerable populations in Edmonton’s inner city.

Manichoose is herself a survivor of exploitation and human trafficking, so she can relate to the city’s most vulnerable.

The purpose of Hate to Hope is to “bridge the gap between one another so we can come together for the same reason, which is to stand up against hatred, against racism and against discrimination,” Manichoose said, adding that everyone should be “getting on the same page when it comes to hatred.”

Be the first to comment on "Hate to Hope: Heal the Divide campaign promotes mutual respect"