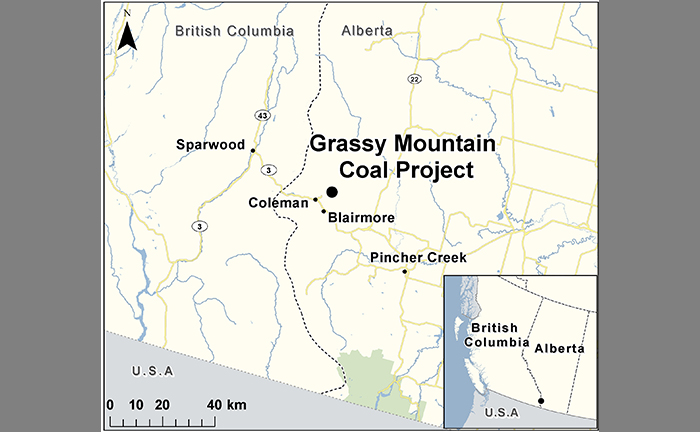 (ANNews) – While opposition continues to mount against the controversial Grassy Mountain coal project that will create open-pit mines on the eastern slopes of the Rockies, including among First Nations, the leadership of Piikani First Nation continues to enthusiastically support the project.

This debate comes as the Alberta government’s decision to quietly rescind the province’s long standing coal policy last year, which prohibited open-pit mining on the eastern slopes, is being challenged in court by a coalition of First Nations, small town councils, ranchers and environmentalists, who fear the impact of the project on the water supply in southern Alberta.

“It is not a hole in the side of a mountain, where people are going in with pickets and chipping at rocks. Open-pit coal mining is an extremely invasive method of extracting coal,” Kainai Nation member Latasha Calf Robe, who founded the Niitsitapi Water Protectors to oppose the Grassy Mountain Project, told the Forgotten Corner Podcast. “They literally blow up the mountain.”

In a Jan. 20 statement, Piikani Nation Chief Stanley C. Grier said band councils are the only people authorized to speak on behalf of their membership.

“Without hesitation, the Piikani Nation, fully endorse the Grassy Mountain initiative as this site has been previously developed, disturbed, and laid dormant for at least 45 years,” wrote Grier.

“Back then Piikani Nation was never consulted at all and (there is) no indication that any type of environmental standards were applied at that time.”

Grier touted the employment and revenues he says the nation will receive from it.

“Responsible resource development can create thousands of good-paying jobs, something that our neighbours in surrounding areas have taken advantage of for decades,” he said, emphasizing that there continues to be global demand for steel, which is made with the same metallurgical coal that Grassy Mountain is slated to produce.

The nation underwent consultation that involves traditional land use reviews, environmental and ecological studies, as well as a cultural and environmental monitoring program that will continue throughout the mine’s existence, says Grier.

Australian mining company Riversdale Resources, which is spearheading the project, boasts letters of support from all five Treaty 7 nations — Piikani, Kainai (Blood Tribe), Siksika, Stoney Nakoda and Tsuut’ina — as well as the Métis Nation of Alberta Region 3 and the National Coalition of Chiefs.

But Calf Robe says this support is superficial.

She says while companies have a duty to consult with impacted First Nations, it often involves them simply telling leadership what they’re going to do.

The Blood Tribe and Siksika Nation have since filed a court challenge to the removal of the coal policy.

“Kainai has a connection to the Crowsnest Pass region that dates back more than ten thousand years,” reads a statement from the Blood Tribe.

“The headwaters of the Oldman River Basin are sacred to the Blackfoot Nations and their way of life. Alberta acknowledges this reality in its land use plans for the region and committed to consulting Kainai and other First Nations on key decisions.  Even so, the Government of Alberta made its hasty decision to strip protection of the area without any consultation.”

However, neither nation has wavered from its support of Grassy Mountain.

First Nations communities are generally bereft of the resources to do their own independent research into the impacts of resource extraction projects, but one can look towards the B.C. side of the Rockies for the impact of open-pit mining on their water supply, Calf Robe added.

“Those messages of ‘Coal is good, coal is clean’ is all that’s provided to First Nations communities,” said Calf Robe. “We’re always stretched to the bandwidth … Nobody has the time or effort to spend money on testing the quality of water.”

This dire economic situation makes First Nations leadership more willing to accept harmful resource extraction projects in the name of job creation, she added, pointing out the average annual income on Blood Tribe is about $20,000.

“We need jobs in our communities, but these aren’t the types of jobs we need,” said Calf Robe.

(Disclosure: This writer is a co-host of the Forgotten Corner Podcast.)