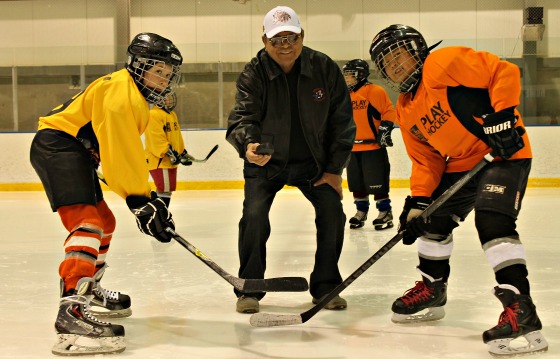 (ANNews) – Fred Sasakamoose, one of the first Indigenous athletes to play in the National Hockey League, died on November 24, 2020 at age 86 after being hospitalized with COVID-19.

Tributes to Fred poured in from the countless people whose lives he had touched ranging from Indigenous leaders to NHL teams and politicians.

Justin Trudeau honoured the Indigenous pioneer by saying, “Fred Sasakamoose survived the residential school system, became the National Hockey League’s first-ever Indigenous player, and inspired many with his stories of suffering and success. He leaves behind an incredible legacy.”

“My condolences to all who are mourning his passing today.”

The Federation of Saskatchewan Indigenous Nations tweeted. “We are at a loss today. Fred Sasakamoose was a legend with humble beginnings. He will be dearly missed.”

“We are deeply saddened to learn of the passing of Fred Sasakamoose. Fred holds a special place in the history of our great game,” tweeted Hockey Canada’s Tom Renney.

Brigette Lacquette, the first First Nations woman to play for the Canadian women’s Olympic hockey team, said, “His story is just simply amazing and to have that perseverance and determination to get to where he [did] … it’s pretty crazy to think what he has overcome.”

“He’s a very humble man, soft spoken, and could really make you feel like you’ve known him your whole life. [He] was just an amazing person and someone that I’m very glad that I crossed paths with,” said Lacquette.

Sasakamoose played 11 games with Chicago in 1953-54 and was the founder of the Chief Thunderstick national hockey championship for young Indigenous players.

Former Philadelphia Flyer and Stanley Cup champion Reggie Leach said, “A lot of people say he only played 11 games.  But those 11 games were everything to our First Nations people.”

“Fred was the kindest man that you’d ever meet. And so down to earth,” Leach said

“He inspired many with his life story. Despite the hardships, he always had a smile and a kind word for everyone. To give back, he visited many First Nation communities and hosted a tournament to showcase the talents of up and coming Indigenous hockey players. His family meant the world to him as he always spoke with love about them.

The Chicago Blackhawks paid respects to the pioneer in a Twitter post that read, “Today we lost a luminary in the hockey world with the passing of Fred Sasakamoose. Fred inspired many across the sport and North America after becoming one of the first Indigenous-born athletes to play in the NHL when he played 11 games with the Blackhawks in the 1953-54 season.”

Sasakamoose will also be remembered for his humanitarian work as a residential school survivor. He had a tremendous impact on the work of Canada’s Truth and Reconciliation Commission (TRC).

Two years after the TRC started traveling across Canada to hear testimony from residential school survivors, it visited Prince Albert, Saskatchewan, for three days. On that third day, Sasakamoose gave his testimony.

Commissioner Marie Wilson spoke of Fred by saying, “There was a point in the commission where I thought to myself, what if we do all this work and we bear witness to people spilling literally blood, sweat, and tears, and nothing changes and nothing happens?”

“That’s how I remember him.”

Be the first to comment on "Fred Saskamoose remembered as a hockey pioneer, a mentor and a humanitarian"