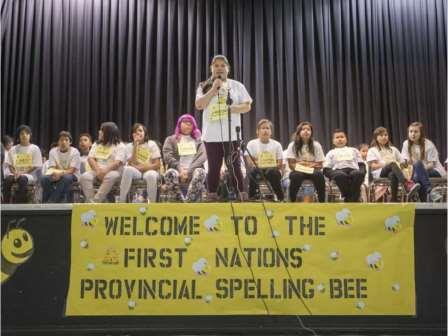 “Our first FNPSB took place on Friday, April 8 at the Don Ross Centre in North Battleford,” explained Student Support Worker and spelling bee organizer, Pauline Favel. “The spelling bee attracted a total of 146 students, a figure that we suspect will grow even larger next year now that the Aboriginal communities have had an opportunity to learn more about the project and the benefits it offers to our young students. It is a very exciting project and one that has garnered a great deal of attention, both in the communities and in the media as well.”

The first ever First Nation spelling bee of its kind, which was endorsed by the national Spelling Bee of Canada organization last year included the participation of 37 registrants in the primary age (6-8 years old) group, 53 in the junior (9-11 years old) group and 56 in the intermediate (12-14 years old) group. Cash prizes were awarded to the top three (provincial) finishers in each of the three categories with the winners in each category taking home $200 (Primary), $300 (Intermediate) and $400 (Junior). 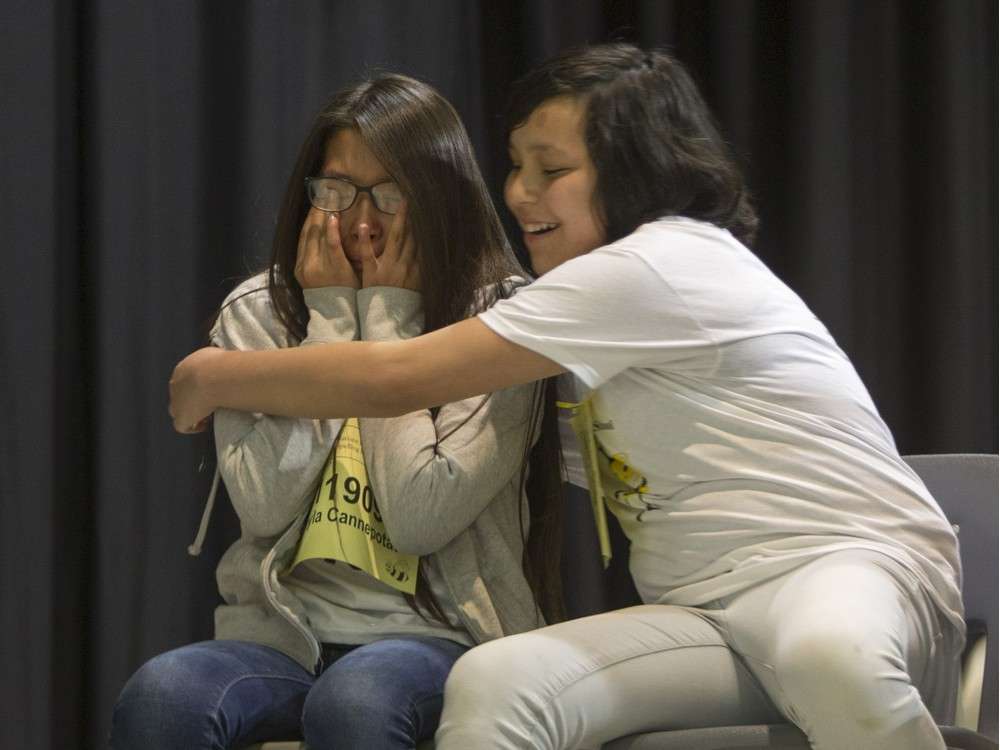 “It was an outstanding event and the participation level was phenomenal,” beamed Favel. “We had lots of family and community members on hand and many other supporters as well, including those who stepped up to help us out both morally and financially. There is already a call from the community to continue to pursue more events in the future; the response has been overwhelming.”

Founder and executive director of Spelling Bee of Canada, Julie Spence, was on hand during the April 8 event and provided background on the organization. The not-for-profit grassroots organization, was established in the greater Toronto area in 1987 and aims to enrich the child and youth learning experience and engage schools and the community at large in an annual education process. To date over 50,000 children have participated in the program.

The provincial segment of the national contest saw three winners emerge from each of the three categories; the first place winners in each category will continue on to the Spelling Bee of Canada’s national finals in Toronto, an event that takes place on Sunday, May 15. 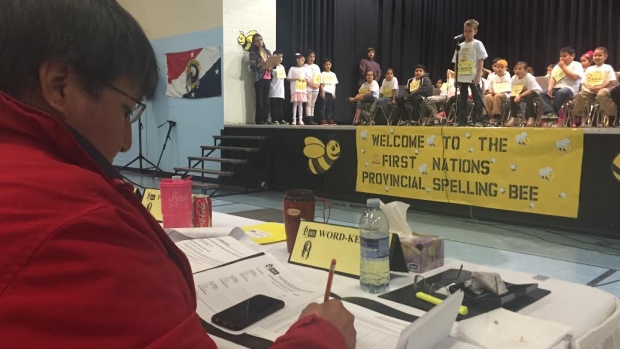 Youngsters from 21 First Nations in Saskatchewan were at the spelling bee. (Photo by James Hopkin/CBC)

“This is a first ever for Indigenous people, and it will mark the first time that an all-First Nations team of students has entered the Spelling Bee of Canada competition in Toronto,” explained Favel. “This is an opportunity not just for Saskatchewan, but all the provinces. The FNPSB is an exciting initiative that promotes literacy, study skills, public speaking skills and healthy competition. The decision to participate empowers students to challenge themselves to be the best they can be.” Pauline Favel, one of the Spelling Bee organizers (Photo CBC)

Favel said the initiative will allow First Nation youth to showcase their talents, abilities and strengths and highlight the work First Nations schools are doing to improve literacy among their students, noting “this is an opportunity that provides benefits for everyone – the students, the families, the communities and the schools.”

Right now the FNPSB bee is only open to First Nation students who attend federal schools located on First Nations and funded through the federal government.

“We have had interest from First Nation students who attend provincially-funded schools, as well as from non-First Nation students, but they had to be turned down, at least for the first year,” she explained. ”We didn’t want to open that door this year because it’s our first ever and we didn’t know what the response would be. We’d be overwhelmed if we had another 100 or 200 kids who wanted to attend. We are looking at ways in which this opportunity can be expanded in the future to perhaps include First Nation students from provincial schools and perhaps to Metis students as well.”

The initial year, noted Favel, has come with some challenges but they have all been overcome; the support of numerous sponsors and the extra help provided by Spelling Bee Canada have made the process a relatively easy one.

“We’ve had a great response from the communities as well as the many organizations, government entities and businesses we’ve contacted and that’s made everything much easier to embrace,” said Favel. “The Saskatchewan Indian Gaming Authority (SIGA) has become our title sponsor but we’ve also had input and help from the Saskatchewan Ministry of Education, Amiskusees Semaganis Worme Family Foundation, Battleford Agency Tribal Council (BATC), the University of Saskatchewan, Sobey’s, Staples, and numerous others. We are so very appreciative of the support we’ve received for this venture from everyone involved; we are all very excited about the opportunities this initiative creates for our young Aboriginal students.”

Each participant has a registration fee of $35, which goes to Spelling Bee of Canada. That organization provides an e-manual with all the words (there are 400) at primary, junior and intermediate levels. A cd with the proper pronunciation of the words is also available to help students study. They also provide a manual for the spelling bee officials.