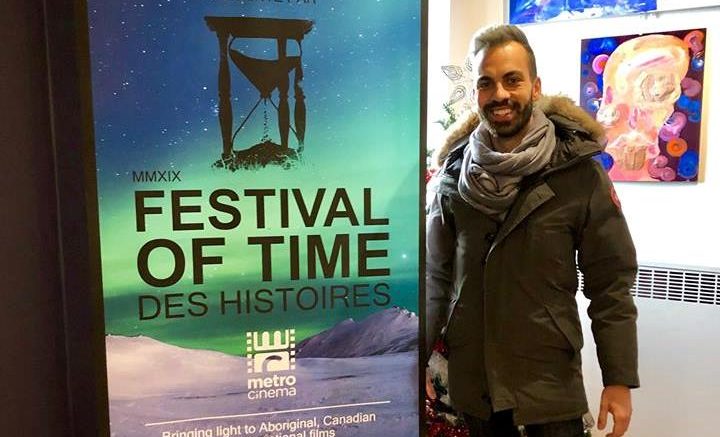 Festival of Time film festival will be held Jan 4 - 6 at Metro Cinema at the Garneau Theatre in Edmonton and will feature Indigenous art in many forms including keynote speaker multidisciplinary artist Lana Whiskeyjack.

(ANNews) – Kick off the New Year with the first annual Film Festival of Time being held this weekend (January 4 – 6, 2019) at Metro Cinema at the Garneau Theatre located at 8712 109 Street in Edmonton. The vision of the Festival is to bring light to Indigenous, Canadian and International films with historic context.

The timing of the festival is perfect as Alberta celebrates January as the Month of the Artist – a time to celebrate the important contributions that artists bring to our community.

The festival, hosted by Zsofi, kicks off with a Gala occurring on the evening of January 4 at 6 pm. The Gala will highlight the top submitted films and include Indigenous inspired appetizers and wine as well as a keynote speaker and a silent auction featuring the art of local Indigenous artists.

“Join us in celebrating Indigenous art in every form with keynote speaker multidisciplinary artist and educator Lana Whiskeyjack and a special appearance from acclaimed Director James Douglas,” noted one of the event organizers Jonathon Zsofi. “Invigorate your senses with Indigenous appetizers, beverages of choice, and one of a kind artwork featured both on screen and in our silent auction. Then discover the Festival’s both anticipated Indigenous and Canadian works including the award winning “The Doctor’s Case” as the evening’s main feature.”

Saturday, January 5 features a full day line up of film screenings for everyone, young adults to those who are young at heart. At 11 am an entertaining mix of fantasy and mythological short films from around the world include the global smash hit “Game of Souls” and the Canadian and globally award winning “In the Beginning was Water and Sky.”

This is followed by a 12:30 screening of “Samuel Barber: Absolute Beauty” and at 2:45 “Murder, Magic, Mayhem: Best of genre shorts” which is a delicious genre smorgasbord of quirky westerns, comedic pieces and much more.

At 5 pm the festival features a mélange from Canada’s film world: Witty Shorts from Ontario, the dazzling Indigenous “In the Beginning was Water and Sky,” all alongside the insightful “IGLOOLIK, A Real Tale.”

At 7 pm be prepared for Stephen King meets Sherlock Holmes – Canadian cinema at its finest – “The Doctor’s Case.” When a diabolical English lord is murdered, Sherlock Holmes and Watson must unexpectedly exchange roles in order to solve ‘the perfect locked room mystery.’ The screening will be coupled with a pre-screening of Film Festival of Time’s ‘Best Short’ Winner “Black Spirit.” The feature Drama, will be presented by its Director James Douglas, with a post screening Q+A.

The Ultimate Historical Drama: “Katherine of Sinai” will be screened at 9 pm wrapping up a wonderful itinerary of film and art.

“Saturday will also include workshops and an award ceremony as well as a lineup of the best of the festival,” explained Zsofi.” Finally, Sunday the 6th is all online streaming of the best in show which you can enjoy from the comfort of your own home.”

Festival of Time has three key goals to achieve, he added. First, to promote Indigenous artists of practical art as well as filmmakers. Second, to give Canadian and Edmonton Filmmakers a chance to have their work shared on the big screen. And finally, to showcase Historical films that speak to lessons of the past as we look to craft a better future.

“Alberta is the first province in Canada to dedicate a month to celebrate artists,” stated Minister of Culture Ricardo Miranda. “It is a way to raise awareness of the challenges artists face and the value they bring to our province. Art is work. Art creates jobs, and art contributes to our growing economy.

“Throughout January, I encourage everyone to learn more about the people behind the art in their community and to find ways to support local artists. Our province is full of amazing events that feature work by Alberta artists. Take in a show at your local theatre. Visit an art gallery. Go to a concert. Or try something new and let your creativity blossom.”

“We look forward to this gala event. Please come out and support this beautiful showcase where proceeds return to the local Indigenous communities and charities,” concluded Zsofi.

Be the first to comment on "Festival of Time features Indigenous art at Metro Cinema in Edmonton: Jan. 4"