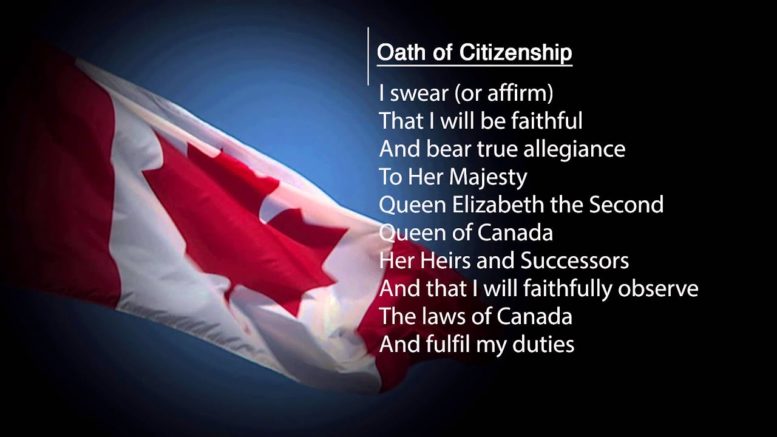 (Ottawa) – The government of Canada is taking to steps to change Canada’s Oath of Citizenship to include a clear reference to the rights of Indigenous peoples.

On May 28, 2019 Minister of Immigration, Refugees and Citizenship, Ahmed Hussen introduced Bill C-99, An Act to amend the Citizenship Act.

The proposed amendment to the Oath reflects the Government of Canada’s commitment to reconciliation, and a renewed relationship with Indigenous peoples based on recognition of rights, respect, cooperation and partnership. It also demonstrates the Government’s commitment to responding to the Calls to Action of the Truth and Reconciliation Commission.

“The change to the Oath is an important step on our path to reconciliation with Indigenous peoples in Canada,” stated Minister Hussen.

The new proposed language adds references to Canada’s Constitution and the Aboriginal and treaty rights of First Nations, Inuit and Métis peoples:

“I swear (or affirm) that I will be faithful and bear true allegiance to Her Majesty Queen Elizabeth the Second, Queen of Canada, Her Heirs and Successors, and that I will faithfully observe the laws of Canada, including the Constitution, which recognizes and affirms the Aboriginal and treaty rights of First Nations, Inuit and Métis peoples, and fulfil my duties as a Canadian citizen”.

“The Truth and Reconciliation Commission’s Calls to Action are an important roadmap for all levels of government, civil society, education and health care institutions, and the private sector to ensure Indigenous people included as we build a stronger Canada together,” stated Minister of Crown-Indigenous Relations, Carolyn Bennett.

“The change to the Oath of Citizenship introduced today responds to Call to Action No. 94 and demonstrates to all Canadians, including to our newest citizens, that Indigenous and treaty rights are not just important to Canada—  they are an essential part of our country’s character.”

“Reconciliation with First Nations, the Inuit and the Métis is not only an Indigenous issue; it’s a Canadian issue,” added Minister of Indigenous Services Seamus O’Regan. “It will take partners at all levels to move reconciliation forward. Today, we are advancing that partnership by proposing that all Canadians make a solemn promise to respect Indigenous rights when they recite the Oath of Citizenship.”

“I welcome the Government’s new legislation to change the Oath of Citizenship to better reflect a more inclusive history of Canada, as recommended by the Truth and Reconciliation Commission in its final report,” noted Senator Murray Sinclair.

“To understand what it means to be Canadian, it is important to know about the three founding peoples—the Indigenous people, the French and the British.

“Reconciliation requires that a new vision, based on a commitment to mutual respect, be developed. Part of that vision is encouraging all Canadians, including newcomers, to understand the history of First Nations, the Métis and the Inuit, including information about the treaties and the history of the residential schools, so that we all honour the truth and work together to build a more inclusive Canada.”