The celestial art that appears on the cover of the February 2015 Alberta Native News is entitled “Turtle Series – Eclipse” and is the creation of the very talented contemporary Métis artist Timothy Mohan.

“Eclipse” is one of a series of paintings by Mohan using a turtle as the central image. In the painting, the turtle partially covers the moon image and eclipses the reader’s view of the lunar image against the backdrop of the sky and stars in space.

In many Indigenous cultures seven sacred laws were given by the Creator to act as a spiritual foundation for human-kind. Each law represents a basic virtue that when taken together will lead to a full and healthy life. The turtle is a prominent spirit in these teachings.

It is taught that Grandmother Turtle was present at the time of creation to ensure that the sacred laws would never be lost or forgotten. The celestial relationship is explained in the Sharing Circle as well as other sources. It states, “On the back of a Turtle are the 13 moons, each representing the truth of one cycle of the Earth’s rotations around the sun. The 28 markings on her back represent the cycle of the moon an of a woman’s body. The shell of the Turtle represents the body of real events as created by the Higher Power, and serves as a reminder of the Creator’s will and teachings.” 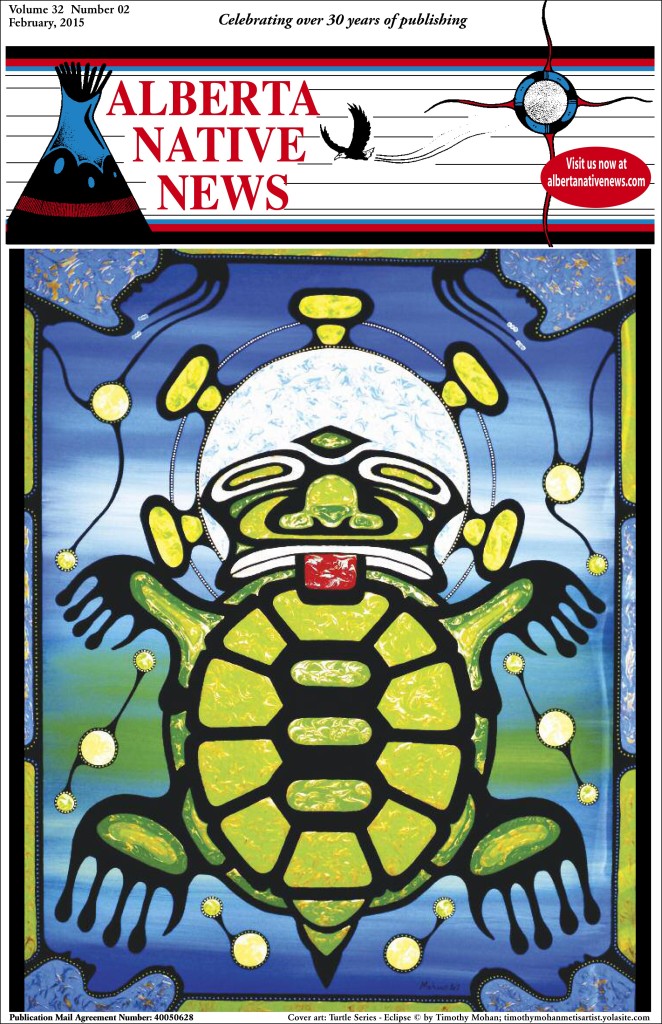 Animal spirits embody each of the sacred laws with the turtle signifying both truth and patience.  Truth is defined as accurate, loyal and
sincere. The Calgary Board of Education quotes Elder Dave Courchene Jr. and Cindy Crowe in describing the significance of the turtle’s teachings as follows:  “Always seek the truth. The truth lives in spirit. Pray every day at sunrise to give thanks to the Great Spirit for the gift of life. Each of the gifts and ceremonies were given by the Great Spirit to the original human beings to help them find the truth and the true meaning of their lives on Earth. Living the truth is living the Seven Sacred Teachings, living from the heart.

“To know truth is to know and understand all of the original laws as given by the Creator – and to remain faithful to them. The elders say that if you can live out these laws, you will know TRUTH, thus leading to a strong and healthy life. To know these laws, one will know truth as the truth will always become prevalent.

“Grandmother turtle also carries her home on her back. She teaches us that all of life is sacred.  You are role models for everyone around you. It is your choice as to the kind of role model you wish to be. When you live your truth, you become a positive role model for others to follow.

“Be truthful at all times, and under all conditions. Learn what truth is, speak your truth, and walk your truth. To know truth is to know and understand all of the original teachings as given by the Creator – and to remain faithful to them. These Seven Sacred Teachings [Respect, Honesty, Humility, Love, Courage/Bravery, Truth and Wisdom], are easy to learn and put them in the mind, but to truly live them in today’s world is a very difficult task. However, as in all of what is right, the truth will always prevail.”

Timothy Mohan is no stranger to the Alberta Native News. His beautiful creations have been gracing our pages since 2002.  His paintings often feature animal spirits as well as the bountiful gifts of  Mother Earth.  He combines both Woodland and West Coast influences into his work with his own unique approach to Native and Aboriginal art. Timothy’s work is full of vibrant colours and spiritual energy, yet at the same time, it’s very soothing and calming.

For more information on the artist and to view his most recent creations visit timothymohanmetisartist.yolasite.com.

Be the first to comment on "Featured Artist for February 2015: Timothy Mohan"