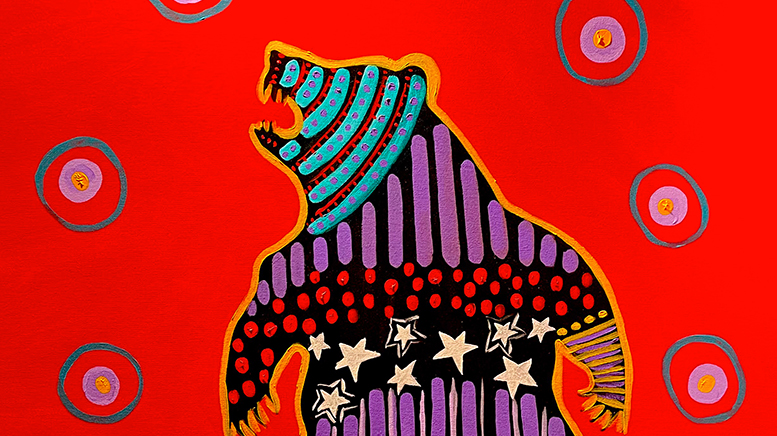 (ANNews) – The playful image on the cover of the September edition of Alberta Native News is by Cree artist, author and educator Neepin Auger.

Neepin was one of the talented Indigenous artists featured at the curated 2021Western Art Show and Sale at the Calgary Stampede. Her art stood out as something really special on its own merit and also as a legacy to her father, acclaimed artist Dale Auger. 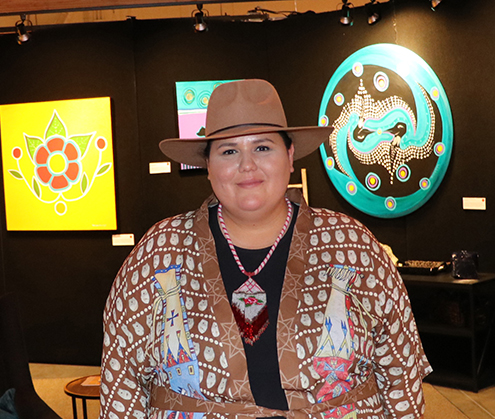 The Calgary Stampede is an iconic venue for Neepin, as it was for Dale, who succumbed to cancer in 2008 at the still-young age of fifty. His art was electrifying and magnetic. It was powerful and moving, and it touched one’s heart and soul.

For those fortunate enough to have viewed his art up close, in person, you know exactly what I mean. And, if you happen to see Neepin’s current works, you’ll see those same elements of art in her style, colours and subjects.

Dale’s art had a defining influence on his daughter Neepin, and undoubtedly inspired her illustrations of images such as tipis, loons, buffalo and eagles that feature elements of her Cree cultural roots. 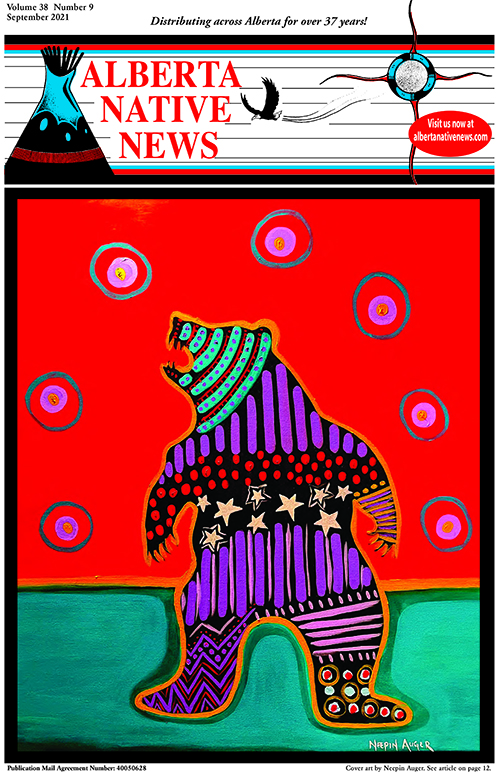 Dale lived and extended his own deep-seeded pride and love for his Indigenous Sakaw (Cree) heritage. His art showcased his culture and heritage. It was an intense passion which, upon his inclusion as one of the featured artists at the world-famous Calgary Stampede’s art exhibition in the perennial Western Art Show and Sale brought a special added flavour and nuance to the fair. In fact, Dale’s art quickly grabbed the attention of innumerable visitors and clientele, to the point that he was awarded “Booth of the Year” honours within the span of just a couple of years. As well, the master artist was soon after inducted into the Western Art Show’s prestigious Hall of Fame.

His daughter is extremely proud of her dad’s accomplishments as is the rest of his family and community.

That Neepin followed in his footsteps is not surprising given the fact that she grew up in her Calgary and Bragg Creek homes surrounded by her dad’s work which he created from his studio located in the front portion of his house.

His art is exhibited in shops and galleries, in private collections, government offices, homes of great movie stars (i.e. Brad Pitt, Anthony Hopkins), museums, and, of course, at the Calgary Stampede.

Today, Neepin carries that torch forward; her art is beautiful, and also represents Cree culture and the traditions of her people.

Dale possessed a Ph.D in Education. He home schooled Neepin during her senior high level and also developed a computer program of the Cree language, used extensively at Blue Quills University.

And every now and then, he’d hit the road to mentor aspiring community members in art.

Neepin likewise, dove into teaching art in the community and educational institutions. This fall she starts a new job serving as vice-principal at Manyhorses High School on the Tsuut’ina Nation, on the outskirts of southwest Calgary.

The strength of both Dale and Neepin’s art resides in those similar elements of using strong and vibrant colours that pull one into that “Auger realm” of art and imagery. It has proven itself in the past and does so today and will undoubtedly continue to do so in the future.

Neepin’s style, colours and subjects capture the same flavour that her dad’s art did. It speaks to you, tugs at you. And, as she herself points out, it says, “Take me into your heart, your life, your home.”

Be the first to comment on "Feature artist for September 2021: Neepin Auger"