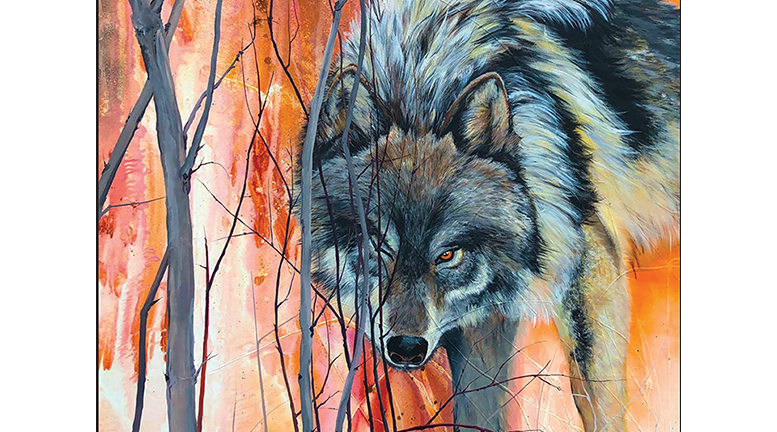 (ANNews) – The art on the cover of this month’s Alberta Native News is by Jesse Gouchey, a Metis Visual artist born and raised in Red Deer, Alberta. His work consists mainly of mural painting, animation, fashion design, and film-making. “I do all kinds of different art,” Gouchey said. The wolf in the cover image is a detail from a painting on a skate board. 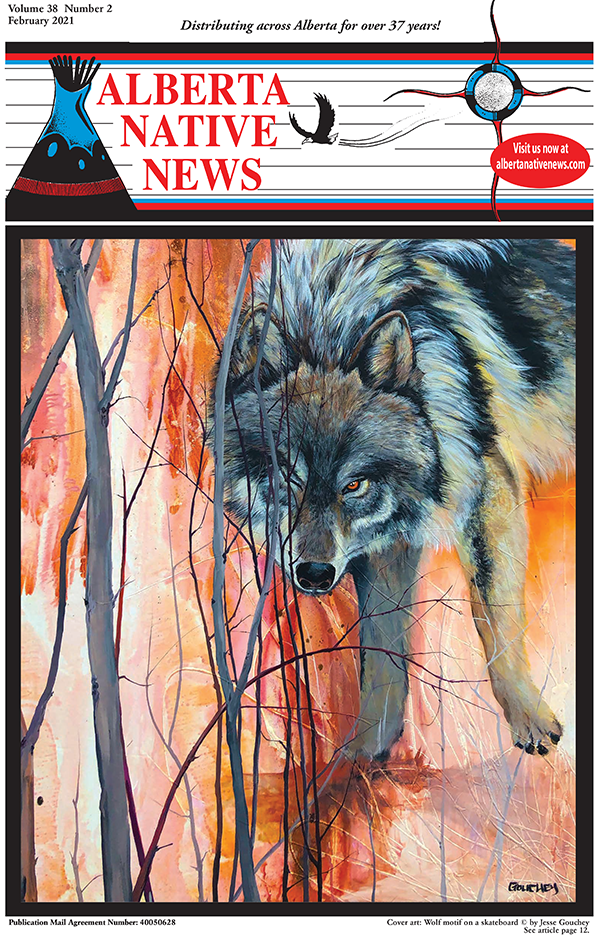 The Metis Artist has been working in the arts industry full-time for fifteen years, though art has always been a part of his life. “My siblings and I used to draw when we were kids and I just kept going with it. It was always something that I did. I just had that mind where I liked to create stuff – it was always the main goal.”

“Basically my whole life is based around art. I’m pretty fortunate to be able to do that – just able to kind of float around and create projects where ever they present themselves,” said Gouchey.

“Opportunities happen, I do the best I can with them, and I just keep it going.”

Before art however, Gouchey spent a fair amount of time in the energy industry by working “a bunch of oilfield jobs – being from Red Deer – and I didn’t like that at all,” he said. “So, I got away from it, moved to Calgary, and started doing art shows, painting murals, working on animation projects and things like that.”

“Once I got to the city, the art world really opened up for me,” said Gouchey.

He then spoke of his mentors and credited Darcy Liscecki as an early supporter and “one of the best painters I’ve ever known. He definitely helped me realize that I had the talent and skill to pursue art.” He also mentioned Brian “Bunny” Batista, who “used to do the Aboriginal youth animation project. He’s just a super powerhouse in the Calgary art scene,” said Gouchey.

As for how COVID-19 has been affecting his work, Gouchey said he was already working from home when the pandemic hit. However, it allowed him to create some new projects that he wouldn’t be normally be making. “I had an art show last year and it’s been good. I’ve been painting steadily one way or another; either through murals or canvas work at home.” 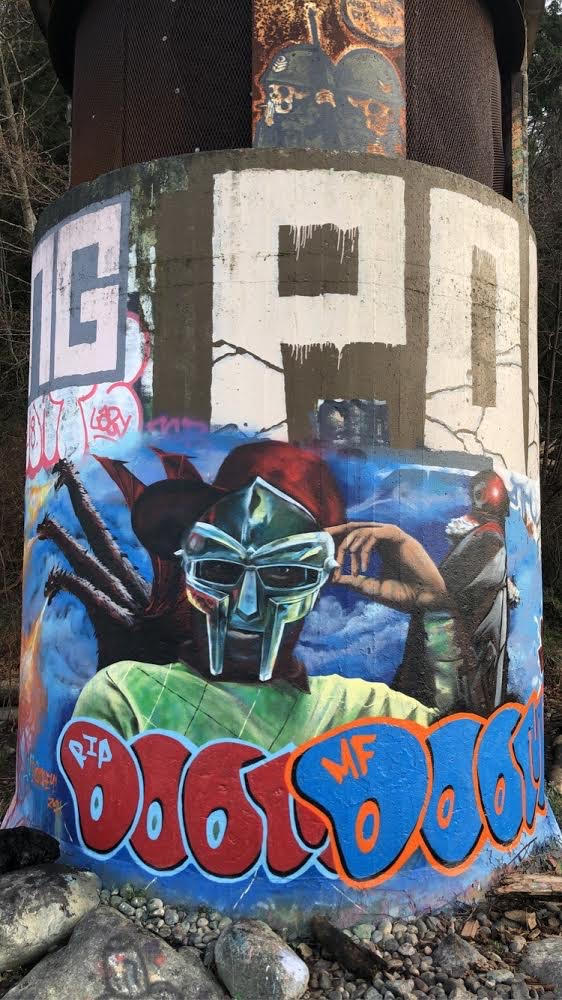 He has also been teaching workshops online, “I’ve got some bleach workshops – with another one going on right away here too.”

“I went and painted murals all summer, all over BC. I’ve been kind of doing my own thing – COVID hasn’t slowed me down too much,” said Gouchey – although, he hasn’t been able to do his normal teaching work with schools and Indigenous communities. “It has affected me – I haven’t had as much going on.”

“But y’know, always look for the best in what life throws at you.”

When speaking about his teaching and his work with young people, Gouchey said, “I encourage youth and I normally have chances to have a voice with the youth due to the work that I do. I’m constantly encouraging people to create – especially if they don’t see it as a legitimate career path.”

“It is a struggle and it’s a hustle.”

“You have to constantly be doing a lot of work that isn’t art-based, like paperwork and grant-writing. But I think all and all, it’s pretty nice to make your own hours and follow your dreams. If an opportunity presents to take it seriously then I would always encourage it.”

The piece which introduced me to Jesse Gouchey was a mural he painted of the late hip-hop artist, MF DOOM. Jesse and I geeked over MF DOOM before speaking about the mural, “he’s my all-time favourite musician. Just as an artist in general and he just totally inspired me to be original and do my own thing. I was always into his persona and everything he was about. When I found out he died I thought, ‘oh, man, I need to do another mural.”’

The mural itself was done over five days in a place called Tower Beach in BC. “I was pretty stoked about that one – I figured it came out really good. It was five days at the beach, kind of by myself, eagles flying above me – I’m new to Vancouver so it was beautiful to be on the ocean and watch the sunset every day,” said Gouchey.

Gouchey also owns a fashion brand under the name Muskwa Clothing. This brand happened organically, said Gouchey, who began the project by creating T-shirt designs with bleach and then received tons of support on social media. “I just did a whole bunch of shirts – went bleach crazy there for a bit – and made just a whole pile of clothes and had a huge order for them. I had people asking for all kinds of stuff, mainly nature-based designs.”

Gouchey then said he was invited to a fashion show where he made a whole clothing line. “It was a show through Mount Royal University called Otahpiaaki fashion week. I did that two years in a row and even made a mural for them.”

“They were just one of a kind shirts before I started printing my designs,” said Gouchey. “I haven’t done much with it in a long time. I’m still bleaching shirts here and there, but I’ve got things set in motion to get it going again. I didn’t do too well with it, I’m not much of a salesman, but I’m definitely going to be doing that again.”