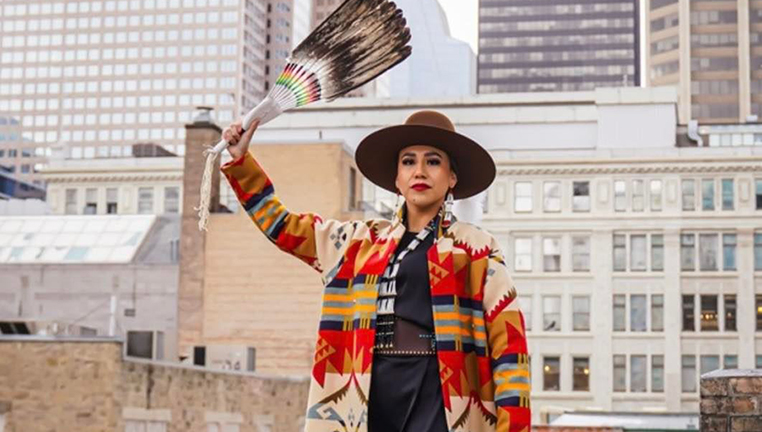 Crowchild is a multi-talented Indigenous woman in southern Alberta. She is a designer and founder of Eagletail House Society. The young woman is utilizing her family’s knowledge keepers for a new recovery home in her First Nation community that’s all-inclusive, for women, men and gender diverse people.

With support from her father, Hal Eagletail, and Aunt Coreen Eagletail-Frazer, she was able to turn her struggles and challenges into a home for recovering addicts.

“It is always an honour to decolonize colonial spaces as a strong, resilient indigenous woman,” said Crowchild. Through her journey and challenges, she was inspired and encouraged by her father and aunt to turn her late grandmother’s house into a home for recovering addicts.”

She said after her grandparents passed away, the home became vacant. Initially, the family requested family members to move into the house, but most of them already had their own homes. “So, I went forward with creating the society,” said Crowchild. “I did it independently.”

She said they were able to create a recovery home within the jurisdiction of Tsuut’ina First Nation however, they are still awaiting approval to get a VCR from the chief in the council.

“We initially planned on partnering with Poundmaker’s or Oxford house, but our Chief and Council didn’t support that initial plan,” said Crowchild. “It was a minor setback, and so we revised our entire structure to focus on healing and to open it to everybody seeking recovery.”

She explained that in November 2020, she and her father created the non-profit organization. At the time, the Crowchild family was working with Poundmaker’s and Oxford house. She said clients from those programs utilized her father’s sweat lodges and they also used her late grandmother’s home.

She said that recently they started adding singing to the services at the recovery house. She mentioned that there is a lot of support within the community. “People donate food and drinks and offer to volunteer their time around the home,” said Crowchild.

She said one of the primary objectives of the house is to rehabilitate former addicts and people suffering from substance abuse issues reconnect them with Indigenous culture and practices.

Through Eagletail House Society, her family can utilize their knowledge keepers. They can also help other community members and those seeking help by reconnecting with their culture meaningfully and spiritually.

If any First Nation community or First Nation family is looking to create their own recovery home within their home nation or utilize a vacant or abandoned house on the reserve, they can contact Crowchild for  a consultation.

She mentioned there’s also a woman who helped Crowchild throughout the process of developing Eagletail Society. She is Director of Siksika Family Services Corporation Deanna Many Shots, and she founded a similar recovery home called Henry Three Suns Child & Youth Society.

Outside of her role as a founder of Eagletail House Society, Crowchild is a highly sought after and talented fashion designer specializing in custom-made Pendleton jackets.

“My style and inspiration replicate my great grandmothers’ who were the matriarchs of our family. Tsuut’ina woman proudly wore the beaver pelt hats “tall hats” and the Headdress,” said Crowchild.

“I wear mine with honour and dignity, as I am a modern-day warriorette who has fought against the injustices and adversities we face as Indigenous women and peoples. I am reclaiming my identity through fashion, culture, sobriety, decolonization, and intergenerational healing. As a mother of four children and a wife, I am the matriarch of my family.”

Crowchild is an example of a new wave of Indigenous social entrepreneurs who are utilizing their knowledge and instead of waiting for others to be the change, they are the change in their communities. She’s proven that with an abandoned house, being born into a family with traditional knowledge keepers and a lot of perseverance, you too can be that voice that brings about changes in your community and helps others in need.