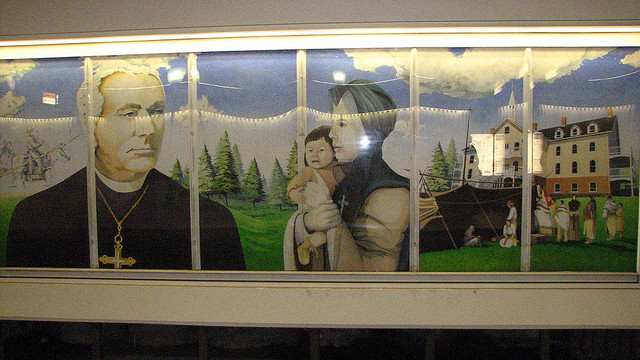 The entire mural was painted bright orange on June 7.

In recent years, Orange has become the colour of the National Day of Reconciliation — also known as Orange Shirt Day. And in light of the discovery of the remains of 215 First Nations children in an unmarked grave found in Kamloops, BC, the colour has come to represent much more.

The original mural has been the source of contention for a long-time, mainly because of the blatant depiction of the Residential School system.

A Catholic Nun is literally carrying away a First Nations baby — the family no where to be seen.

“I’m very sad that it took this tragedy on this scale to move all of us to this action,” said Edmonton Mayor Don Iveson.

“People, particularly survivors and intergenerational survivors of residential schooling, have no choice but to be in its presence and behold it and people have reported for some time that is triggering and re-traumatizing for them.”

The LRT station was also named after the Residential School Bishop, and the city council’s decision will also remove any namesakes for Grandin that appear on Municipal sites.  The Grandin Catholic Elementary School in Edmonton also bears his name and it has been reported that the Catholic School Board is currently reviewing the name. There are also calls for Bishop Grandin High School in Calgary to undergo a name change.

His name is already being removed from the LRT signage in Edmonton.

The city will be putting together a working group made up Indigenous and Francophone leaders in order to figure out what the next steps for the mural are. There will also be another working group dedicated to the re-naming process.