There’s a new kid on the block in Edmonton.

The Kokom Kisewatisowin Society (KKS), led by Elder Elsie Paul, is a group of retired professional Aboriginal women whose sights are set on reclaiming the traditional ways of kokoms (grandmothers) of the past.

As stewards of Mother Earth in addition to Aboriginal families and communities, one of the

society’s main objectives rests with the reclamation, retention and sharing of a strong culturally-based movement that utilizes the learned gifts of the kokoms.

After all, explains Paul, “We’re a multi-faceted society that will do many different things. That’s what makes us unique.”

Ms. Paul plans to conduct “at least two rediscovery camps this summer.” These would consist of cultural and traditional recreational 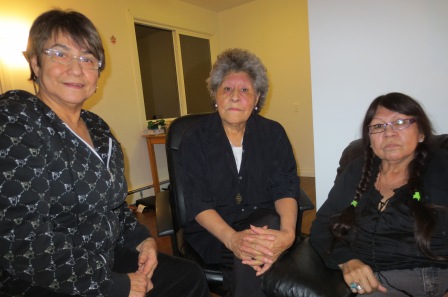 The camps would also offer a means of educating other groups in a practical way that would employ the age-old scenario of learning by doing. It is how Aboriginal people traditionally taught and learned the values and cultural traditions of their fore-bearers. What with the rapid changes of modern technology in a fast-paced modern world, especially in large urban centres, the return and retention of Aboriginal culture, values and traditions would be strengthened. With the support of three of their kokoms who are good singers, Paul also plans to hold “a modern-day spring ceremony that will be a family-oriented gathering.”

The Society looks to further assist this process by addressing support in such areas as child welfare and corrections, bereavement and loss, addictions, Elder needs and abuse. The society plans to bring in special guest presenters and hold weekend camps.

So vital to all of this will be the application of the medicine wheel teachings that incorporate the four elements of life – physical, spiritual, emotional and mental. It would, thus, bring harmony and balance as well. These gifts would be shared with so many others – at schools, conferences and the like.

In reality, the kokoms will be role models.

Paul knows very well the importance of involving schools. When children have problems, they always need someone to reach out to, often a grandmother. Grief and loss, not only through deaths, but from breakups and separation, can often lead to depression, possible suicides or addictions.

“When we get some funding support, we can offer our services to schools and be very beneficial,”  states Ms. Paul. Much of Aboriginal culture and tradition fell by the wayside with the institution of the Residential School system, she adds. “Parenting skills and the preservation of ceremonies” are just two key examples. These are “areas that require serious attention.”  They are part of the bigger picture in reclaiming one’s culture.

“Kokoms, grandparents, are the keepers of the families,” Ms. Paul expresses. “We may be elderly, but we’re not retired and we’re still capable of doing a lot.” Thanks to that presence of mind, the society will move forward in a good way.

The society is presently seeking funding and permanent headquarters for its operations. The Native Healing Centre has opened its doors to assist the Society and is there for them.

Originally from the closed-out Metis Settlement at Wolf Lake, Alberta, Elsie Paul later moved on to Saddle Lake where she acquired some of her traditional knowledge. As a young lady she moved into Edmonton and through the years she had a number of the very good Aboriginal Elders help mentor her along her own particular cultural, traditional and spiritual journey.

She is a firm believer in the value and necessity of transferring the knowledge of the kokoms to today’s youth. It is through the younger generation that Aboriginal culture will grow and prosper. It is why people like her do what they do.