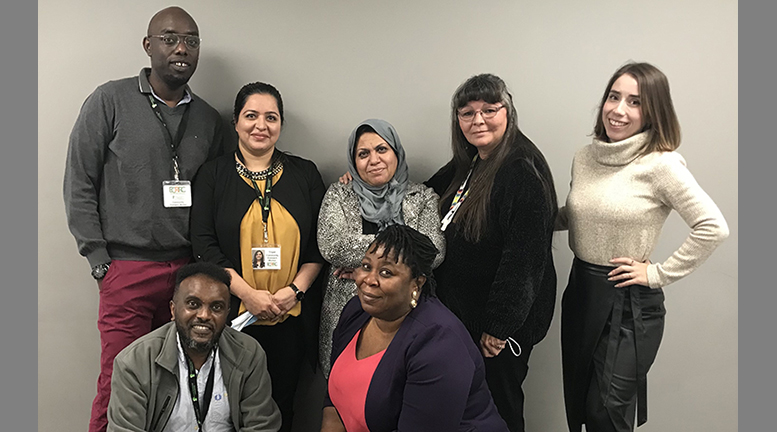 (ANNews) – On October 19, in an effort to continue promoting positive Covid vaccine awareness, the Edmonton Covid Rapid Response Collaborative (ECRRC) held another unique Sharing Circle, this time with interfaith and medical leaders. The purpose of the meeting was to strategize ways to increase vaccination rates in Edmonton’s Indigenous and other communities.

Alongside the handful of faith leaders was Dr. Chris de Gara, surgeon, Professor of Surgery (McMaster University) and Senator (U of A) who used his presentation to provide tactical points to counter misinformation on the Covid-19 vaccine.

Dr. de Gara had the audience reflect on anecdotal information while asking the question why strong personalities and extremists are more believable than scientists. He began by discussing why vaccine hesitancy is greater among ethnic minorities; low confidence, distrust of public services, institutional racism, inconvenience, lack of endorsement from community leaders, poor communication, and money are all points to consider. Dr. de Gara cleared up a number of popular misconceptions, (for example, if Covid vaccines affect fertility; they do not).

“This is a pretty potent virus and my sense is, even if you got herd immunity and 85% of the population were vaccinated, Covid is going to be around,” he said. “I was in England recently and was amazed at how deeply disinterested they were in Covid, as evidenced by 65000 in Wembley Stadium watching a soccer match, shoulder to shoulder and here we are in this room all covered up, while [thousands of people] here were at the hockey game. I mean, where is the disconnect in all of this? So, this mixed messaging just adds to the confusion; the miscommunication is such a shame.”

Pastor Menghisteab Teclemariam described some of the challenges in addressing this issue to their communities. “Within the faith communities there has been no straight communication.

“I want you to understand the people we are serving. These people come from different parts of the world. We don’t have the privilege that others have on information.”

Teclemariam further explained, “We are leading people but they are limited by language and a lot of the information is given by the authority, by the system and sometimes it’s not clear to us as well. We need simple information to give the people to understand what the vaccine is.”

So, for some the problem is a lack of information; for others it is an inundation of information on multiple levels. For others, it’s the fact that the recommendations have changed over time with the introduction of new variants.

Teclemariam shared that early that morning he was discussing vaccinating children. “Before they were saying children are fine and that COVID is not going to affect them,” and now they are saying that children twelve and up should be vaccinated and likely it will be expanded to children five and up. Teclemariam said that the information itself is confusing. “We also have to translate it into our language so they can understand it.”

Dr. de Gara agreed, “If only our government leaders were much stricter and said, ‘as of tomorrow, it is a law [to get vaccinated]’ that would [be clearer]. Even with [language barriers], they would understand that it is a law.”

Pastor Sandy Ferguson explained how the United Church of Canada has been blunt about promoting vaccination and has “been an outlier in many ways.” He expressed his frustration with the Kenney government bending over backwards to provide religious exemptions.

“In my sermons, this is not an issue of religious exemption,” continued Pastor Ferguson. “In terms of misinterpretation of scripture, this happens in Christian scriptures as well. What happens is they get a bible verse that vaguely says something to the effect of ‘we can’t have this because it’s Gods will.’  Just a couple of weeks ago, during my sermon I said, in my most sarcastic tone possible, that I read about the American firefighter that wanted a religious exemption saying it was all part of God’s plan. You’re a firefighter! Using your rationale, we would stop having firefighters because the fire burning stuff down is God’s plan!”

Across all faiths the challenge of misinformation or lack of clarity has been common and it has been the latest focus of their work. Pastor Ferguson summarized his thoughts this way: “I was an atheist for many years and one of my anecdotal evidence points was that Christian churches didn’t have insurance policies because having an insurance policy was a lack of faith in God. The bible was written over one thousand years, by humans, through much editing, shaped by the world around it.

“As a mainstream protestant Christian who is deeply rooted in science, I believe it is your religious duty to get vaccinated.”