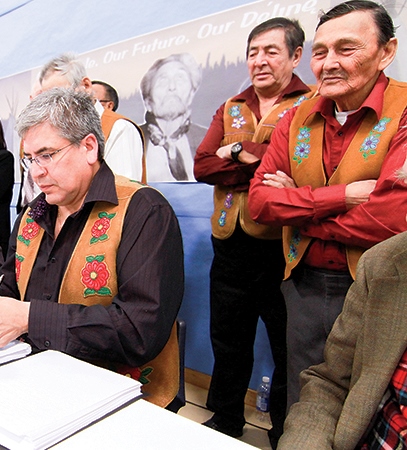 (August 22, 2016, Yellowknife) – Known as the birthplace of hockey, Délınę, a community of 472 people in the Northwest Territories, is about to achieve another historic first. It will soon be the home of Canada’s first combined Indigenous/public self-government; a government where both constitutionally-protected Treaty-based self-government authorities, and the functions of a public government for all citizens, are combined into one organization.

This is a significant and historic moment for Délınę, for the NWT, for Indigenous people, and for all Canadians. Not only is it Canada’s first combined Indigenous/public government, but also the first community-based Indigenous self-government and the first Indigenous/public government in the Northwest Territories. After 18 years of negotiations and more than two years of transition planning, the Délınę Got’ınę Government will now represent all residents of Délınę and the approximately 1,000 Délınę First Nation Citizens across Canada.

“We are proud to have accomplished self-government through the collaborative effort of many dedicated people,” says Raymond Tutcho, who will become the first ʔekw’ahtıd̨é (Leader) of the new government.

“This is an historic moment for all Indigenous people working toward community-based self-government. Our elders have a strong vision for the future of Délınę and have been instrumental over the past twenty years in guiding the self-government negotiations.”

Délınę will host celebrations to mark this historic moment on September 6, 7, and 8 with the first annual Délınę Łénɑts’ehdǝ́ Dzené (Community Gathering) on September 7 that will include officials from the governments of Canada and the NWT, the Délınę government leaders, and Délın̨ę residents. All are welcome to attend.

According to Elder Charlie Neyelle, the Elders Council representative to the Délın̨ę Got’inę Government, “Our land is the source of our culture, language and spirituality. We have been guided by our elders, supported by our leaders and people, to establish our own government, that we may protect our way of life and our lands for future generations. We welcome everyone to join with us in celebration of this important milestone for our community.”