May 7, 2015, Territory of Treaty No.6…Cold Lake First Nations congratulates Premier Rachel Notley and the Alberta NDP party on their historic election win of a majority government in yesterday’s Alberta election. 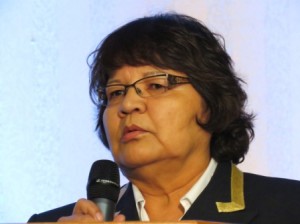 “First Nations in Alberta have never benefitted from our Province’s wealth like all other Albertans have. Our infrastructure is 50 years behind the rest of the Province of Alberta. We look forward to creating new fiscal relationships with the NDP government that will ensure that First Nations are no longer marginalized with substandard living conditions in Alberta,” said Chief Martial.

Cold Lake First Nations, with the full support of Treaty Six First Nations in Alberta, has been at the forefront of advocating for a full, national independent public inquiry into the Missing and Murdered Indigenous Women in Canada. “The silence has to end, our women are the backbone of our communities and we look to Premier Notley and her government to implement her 2015 election platform promise by supporting national inquiry and force the federal government to take action without any further delay,” stated Chief Martial (who is also Grand Chief of Treaty No.6).

“Cold Lake First Nations is hopeful that the new NDP government led by Premier Notley will get to work immediately to start fulfilling their election promises to Indigenous Peoples. Premier Notley has made meaningful assurances to our Peoples and we are optimistic that these promises will be fulfilled,” added Chief Martial.

Cold Lake First Nations congratulates Scott Cyr, the newly elected Wildrose MLA for the Cold Lake-Bonnyville riding. “We also congratulate other candidates who also ran in our riding. We thank them for their dedication and commitment to making our Province a better place to live and work. Cold Lake First Nations looks forward to continuing to work with our neighbours,” concluded Chief Martial.