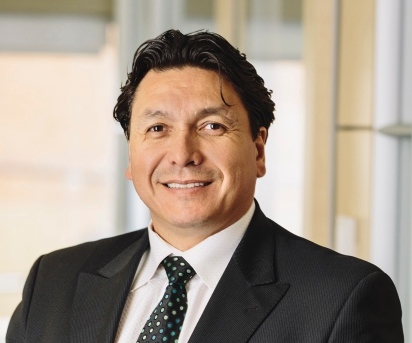 December 2015, Toronto, ON — The Canadian Council for Aboriginal Business (CCAB) and ESS Support Services (a member of Compass Group Canada) would like to announce that the recipient of the 2016 Aboriginal Business Hall of Fame (ABHF) Lifetime Achievement Award is Chief Darcy Bear of Whitecap Dakota First Nation. Chief Darcy Bear has overseen the transformation of his community, increasing opportunity and prosperity against formidable odds. In Fall 2016, he will have served his community for 25 years.

In 1991, the community was dealing with significant debt and few prospects. Chief Bear and Whitecap developed a financial management plan that lead to the development of a self-governing Land Code, giving the community the power to sell long-term lease hold interests. This gave the community the funds it needed to spur economic development, creating a golf course that is now number one in Saskatchewan and one of the top 20 golf courses in Canada. It also allowed for the development vital infrastructure to the community. Through a combination of smart financial planning, great partnerships, and prudent business development, Whitecap was able to complete a three year financial plan in two years and repay debt on the golf course in half the time.

In a letter praising Chief Darcy Bear, Saskatchewan Premier Brad Wall said: “Under Chief Bear’s leadership, Whitecap Dakota First Nation has gained status and respect as an economic force within our province. His ability — a talent I have seen firsthand — to work with both governments and business in a constructive way to find solutions and achieve results is widely recognized.”

“Chief Darcy Bear is involved in so many different pillars of business and community development. As a both a community and a business leader his portfolio is incredibly dynamic. Chief Bear and Whitecap Dakota First Nation’s story is inspirational. His personal accomplishments are many and diverse, and he truly embodies what the Lifetime Achievement award is all about,” said Michael Hachey, President of ESS North America.

The Lifetime Achievement Award recognizes a First Nations (Status or Non-Status), Inuit, or Métis business person whose community leadership and business success has made a substantive contribution to the economic and social well-being of Aboriginal peoples across Canada. This award is given at CCAB’s Annual Toronto Gala.

“Chief Darcy Bear is a national leader and has made Whitecap Dakota First Nation a model of community-driven business development. He is a leader who is respected by government, Canadian and Aboriginal businesses, and his own community. CCAB looks forward to honouring his 25 years of incredible service on February 2, 2016 at our annual Toronto gala,” said JP Gladu, President & CEO of CCAB.

To learn more about this year’s gala visit https://www.ccab.com/18th-annual-toronto-gala.