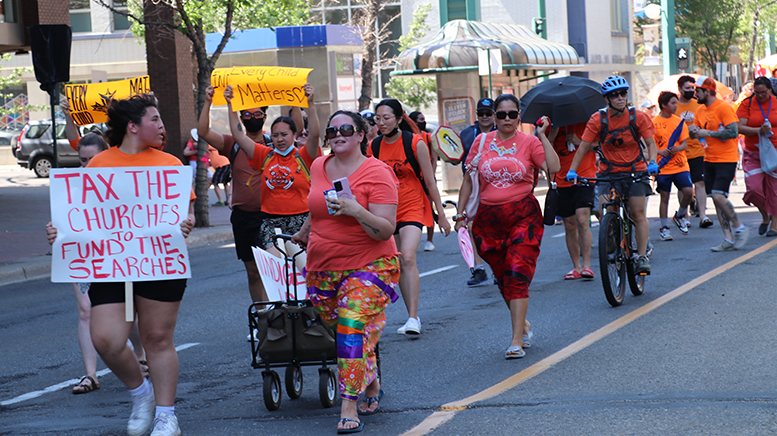 An "Every Child Matters" March and Rally was held in Edmonton on Canada Day to help commemorate the brutality of the Indian Residential "Schools." (Photo by Terry Lusty)

(ANNews) – Canada Day 2021 will forever be an historic day in Canada as the brutal and genocidal truth of the country’s residential school system has become mainstream knowledge.

After the recent discoveries of unmarked gravesites at former residential schools in Canada, outrage and immense mourning has been in the hearts of Indigenous and non-Indigenous people across the country.

The Metis Nation of Alberta President, Audrey Poitras, said in a statement on June 30th, “Canada Day has, for many, been a time for pride and patriotism. This year as you celebrate and gather with family and friends, it must also be a time to reflect that the nation of our shared pride is also one that was built on colonialism, genocide, and the continued oppression of Indigenous peoples.

“The discoveries of hundreds of unmarked graves at residential schools are a reminder of Canada’s dark past, and for many Indigenous peoples, the traumas and the losses are a very real part of the present.”

Because of the discoveries, some Canada Day celebrations were cancelled with many even calling to cancel the entire day itself.

In Edmonton, both rallies happened on July 1st at the legislature grounds, with hundreds donning orange shirts in honour of the lives lost in residential “school” institutions.

City Mayor Don Iveson released a statement saying, “Today as we come together to recognize a very different and difficult Canada Day, it’s important that we pause to reflect on our past, our present, and our future.”

“But it is also a story filled with blatant discrimination, with prejudice, and yes, with cultural genocide,” said Iveson.

While some cities cancelled their Canada Day celebrations, Edmonton continued with their firework celebration, but only after consultation with First Nation leaders in the confederacy of Treaty 6.

“We inquired about the sensitivities around fireworks and in the end there was not a specific request from Treaty Six to not proceed with fireworks but guidance to say ‘Here’s how the day should be approached and if there are to be fireworks, this is how it should be presented,’” said Iveson.

And while the firework display continued, the city announced plans to turn the lights at the Walterdale Bridge, High Level Bridge, City Hall, and the Mutant Conservatory the colour  orange, which has become associated with the Indigenous movement in Canada as of late.

First Nations in the province also held events honouring the lives lost in the schools.

Enoch Cree Nation, located beside Edmonton, led a convoy raising awareness for the residential school tragedy that went from the reservation to Wetaskiwin.

Mikisew Cree First Nation in Fort Chipewyan consulted elders in the Nation as well as instructed its members to wear orange and reflect on the seven generation long situation.

“This has been an incredibly difficult time for all of us,” Chief Peter Powder wrote. “We need to share our pain, to heal, to pray, and to plan how to move forward.”