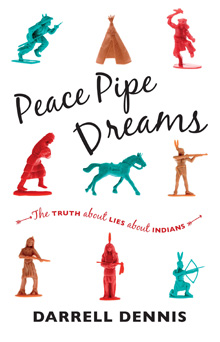 Darryl Dennis is a broadcaster, actor, playwright, comedian and most recently an author who just released his first novel, Peace Pipe Dreams: The Truth about Lies about Indians, published by Vancouver-based Douglas & McIntyre. A must-read book, Peace Pipe Dreams is filled with puns and  anecdotes that bring about lots of laughter, but the subjects Dennis embraces throughout his 232 page manuscript are anything but funny. Using wit and wisdom in ways that will surely capture the attention of any reader, Dennis exercises restraint by utilizing brilliant penmanship as he chops up the myths and slashes his way through the stereotyping that has aided and abetted more than three centuries of suffering throughout Canada’s Indigenous communities.

Peace Pipe Dreams delves into the sordid mess brought about by inaccurate historical preconceptions and the continuing affect they have on Aboriginal citizens today. In his effort to shed light into the half-hearted relationship between Aboriginal and non-Aboriginal Canadians and the current state of affairs between First Nations and federal government bureaucracy, Dennis offers a sensible overview of First Nations issues and why these issues need to be addressed. Access to clean water, the consequences of the Indian Residential School era, addictions treatment, resource development, First Nations sovereignty, treaty violations and racial stereotyping using hurtful words and a lack of common decency are among the topics the author brings to light as he treads through the muddied waters, offering what could be the way to a new beginning. 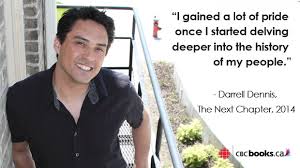 In a recent interview with CBC, Dennis was asked why he writes. His answer: “I want other young Native people, or any Native person out there who is internalizing those same things and dealing with that discrimination on a daily basis to be able to say: No, what you are saying is not right, you don’t know what you’re talking about. Here are the facts.”

Those facts are easily identifiable for most civilized people, even without reading this particular book, because terms like ‘squaw’ ‘savage’ ‘chug’ and ‘redskin’ are so blatantly racist that even the most ignorant among us should be able to recognize that fact. The problem lies within the fact that Canada, civilized or not, has double standards when it comes to Aboriginal peoples, easily proven when one considers that there is no punishment for those who sling racial slurs such as those above, but call a member of the LGBT community a derogatory term and you could end up in a courtroom charged with a hate crime.

Another question answered by Dennis deals with how Canadian history is taught in the schools. To that, Dennis replied, “All we are taught about is the glory of European and westward expansion and how Europeans came to Canada and tamed this untamed wilderness. The actual reality of Canada is that in many respects the Europeans who came to Canada were reliant on the native populations. They relied on them for military alliances, for political alliances, for financial alliances. This is really something we are not taught in school because it doesn’t fit into the paradigm of the whole European bravery and settler romanticism that we have.”

When asked what he learned in school about his own heritage, the  author replied, “What we were taught is that we were around at the beginning and we were pretty primitive, Neanderthalean almost, and then the Europeans came and then we just disappeared for some reason. That is completely the opposite of the reality of Canada. We only show up in Canadian history to slow the wheels of progress. I wouldn’t say we were lied about in textbooks, but we were really omitted from the textbooks.”

Dennis tackles a variety of difficult issues throughout his book and in almost every case he uses symbolism and humour to stress his points, laughing out loud at the inane painful and hurtful encounters in a way that draws attention to the reality of why those encounters continue to exist. In the end it all comes down to one thing, a lack of social respect propagated by various levels of government that refuse to eradicate the nonsense that  appears in classroom history books. These books were written by a European culture that fails to recognize the fact that Turtle Island was once dominated and successfully maintained by Aboriginal peoples. Aboriginal Canadians have made and continue to make great sacrifices as significant contributors to Canada’s well-being, despite the fact that they have been persecuted, enslaved and exploited with false promises and outright treachery for more than 300 years.

Peace Pipe Dreams is an outstanding read and though the author doesn’t appear to have any great expectations when it comes to social change and Aboriginal relevance, he does offer inspirational insight into what could be, if only things were different.

The author focuses somewhat on Canada’s federal government as he wades into the mire of broken promises. He clarifies reasons why the current relationship between First Nations and government continues to be saturated by the stalemated and burdensome bureaucratic unwillingness to compromise and accommodate First Nations through fair and equitable treatment and a sharing of resources revenues.

In his book the author covers a multitude of subject matter and in doing so engages his readers in ways that haven’t been seen before. Dennis takes us to the doorstep of change, in fact he introduces his readers to a series of doors that need to be opened, explored and discussed if positive change is to ever take place. But he hasn’t given up hope and neither should you.

Ever-optimistic, Dennis noted, “Not since first contact have Native people been so active, so prepared and so ready to change perceptions in order to claim our past glory and the inevitable glory of our future.”

Darrell Dennis is a playwright, broadcaster, actor and comedian. His one-man show Tales of an Urban Indian was nominated for two Dora Awards and was produced for multiple tours across North America. His feature film adaptation of Tales was one of thirteen international screenplays accepted to the Sundance Screenwriters Lab. He is also known for his role in two CBC TV series; he played Frank Fencepost on The Rez, and Brian Potter on Northwood. Dennis also co-wrote and hosted the groundbreaking CBC Radio program Revision Quest, which ran for four seasons and won the prestigious New York Festival Award. As a comedian, he has performed in televised galas at the Winnipeg Comedy Festival and the Just For Laughs Festival. Dennis currently lives in Los Angeles, California.

Peace Pipe Dreams: The Truth about Lies about Indians,  was written by Darrell Dennis. The cover is by Shed Simas and Anna Comfort O’keeffe. The book was published by Douglas & Mcintyre, isbn: 978-1-77100-040-6.

Book Review: The Man Who Lived with a Giant: Stories from Johnny Neyelle, Dene Elder

Be the first to comment on "Book Review: The Truth about Lies about Indians"