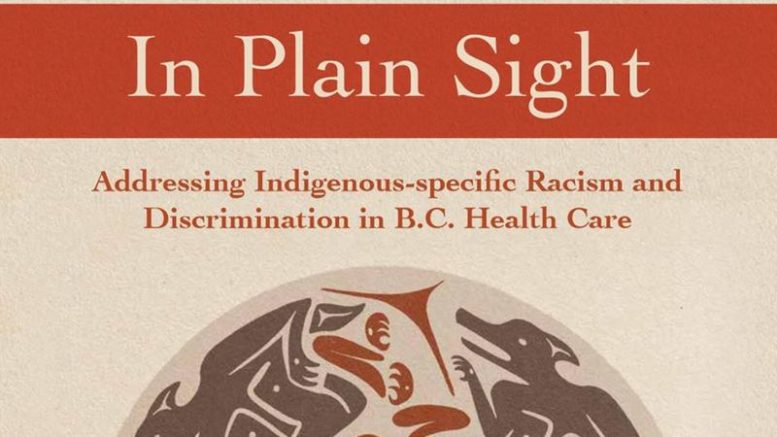 (ANNews) – Mary Ellen Turpel-Lafond – lawyer, judge, and legislative advocate for children’s rights – completed and released a report last month which examined the Healthcare system within B.C and how it affects Indigenous Peoples.

The report, In Plain Sight: Addressing Indigenous-specific Racism and Discrimination in B.C. Health Care, stems from an independent investigation following allegations that surfaced earlier this year about a “Price is Right” game being played in some BC hospital emergency rooms in which health care workers were guessing blood alcohol levels of Indigenous patients entering those ERs.

The specific “Price is Right” game was not found to be a wide-spread activity which all B.C hospital workers participate in, however, there was evidence of widespread pervasive systemic racism that is encountered on a regular basis by Indigenous patients and their families, as well as Indigenous health care professionals.

There was “extensive profiling of Indigenous patients based on stereotypes about addictions.”

The report includes first-hand accounts from patients, witnesses and health-care workers through 11 key findings, followed by two dozen recommendations for change, with nearly 9,000 people participating in the investigation.

Out of the findings, it was discovered that eighty-four percent of Indigenous people who participated, reported experiencing some form of discrimination in health care. More than half of the Indigenous health-care workers who participated said they had personally experienced racism at work.

“Our review found clear evidence of a much more widespread and insidious problem – a lack of cultural safety and hundreds of examples of prejudice and racism throughout the entire B.C. health care system,” Turpel-Lafond said.

The report is putting forward 24 recommendations to government, including improving accountability, legislative changes, and an improved complaint process.

There are also recommendations focused on mandatory health professional education, better public education about Indigenous history and health, and a new School for Indigenous Medicine.

Cheryl Casimer, First Nations Summit Political Executive, spoke on the matter by saying, “The extent of systemic racism identified by Dr. Turpel-Lafond is very disheartening. Every person in this province deserves to have access to the same level of quality healthcare regardless of race or colour.”

“It is offensive to know that there are Indigenous people in BC that are afraid to seek medical treatment because of the racism they may face. Our healthcare system must be one based on equality and cultural inclusion. The recommendations Ms. Turpel-Lafond provides paint a clear path forward towards a more accountable, inclusive system that has no place for racist attitudes, actions and inactions.”

Regional Chief Terry Teegee of the BC Assembly of First Nations said, “We have known for years that the healthcare system in this province treats First Nations people with disrespect and discrimination.”

“Now, thanks to Mary Ellen Turpel-Lafond and her team, we have the proof of this deep seated, systemic and horrific racism within the healthcare system. This is not a matter of a few bad apples; the investigation found that many high-level administrators knew of this racism and chose to ignore it.”

“I urge the provincial government to immediately engage with First Nations leadership to shape a way forward for our own structures, but to also support, inform and direct those in leadership to achieve cultural safety and a strong Indigenous human rights foundation within the system. It’s time that the BC government takes hard and urgent action to enforce Indigenous peoples’ right to safety, dignity, and respect when seeking medical assistance,” said Teegee.

B.C. health minister Adrian Dix has apologized for the treatment of Indigenous Peoples in the healthcare system, “Racism de B.C.’s health-care system an unsafe place for many Indigenous peoples to access services and the care they need.”

“I want to make an unequivocal apology as the minister of health to those who’ve experienced racism in accessing health-care services in British Columbia now and in the past,” he said.

Dix said he will appoint an associate deputy minister to lead a task force responsible for implementing the recommendations, which include legislative, policy and structural changes focused on changing systems, behaviours and beliefs.

Meanwhile, A coalition of First Nations leaders who have been calling on BC’s Ministry of Health to share COVID-19 case information with their governments for months, say they feel vindicated by Mary Ellen Turpel-Lafond’s report on systemic racism.

The nations have been requesting the following COVID-19 information since May 2020, and have been engaged in government-to-government negotiations for months, but with no result:

“Dr. Turpel-Lafond’s powerful truth-telling report underscores the importance of eliminating systemic racism on an urgent basis,” said Marilyn Slett, Chief Councillor of the Heiltsuk Nation. “We are calling once again on the BC government, and its new task force, to eliminate discrimination in our health care system, including the Ministry of Health’s failure to share vital COVID case information with Indigenous governments, which puts our people at risk.”

Judith Sayers, President of the Nuu-chah-nulth Tribal Council, said, “The Ministry of Health’s ongoing refusal to share this information is based on stereotypes about First Nations governments. Our governments receive and work with confidential information every day. It’s insulting to suggest that we can’t be trusted with this information.”

“The racism must stop now.”