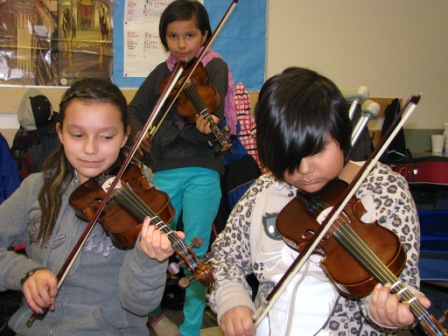 Walking into the busy Grade 4 classroom at Prince Charles School in Edmonton, one couldn’t help but notice the hustle and bustle of more than a dozen young students as they made their their way to the back of the room. Once there, they firmly but gently grasped their musical instruments and readied themselves for a quick and somewhat unexpected concert-for-one.

A few minutes later and the students were ready to fire up their bows and unleash a display of their musical talents. Gathering near the back of the room in a formed semi-circle with their fiddles, guitars, and a single mandolin, the students waited in anticipation as teachers Judy Gatto and Gary Lee asked the 9 and 10 year old students what they’d like to play. And play they did!

“You look surprised,” smiled home room teacher Judy Gatto, noticing the wide-eyed look I must have displayed upon hearing the sweet sounds brought to the room by the group of young students clutching their instruments and jamming like big league professionals sitting around a campfire homecoming.

Surprise is a much milder superlative than I’d have used. This young group of students, and the Grade 5’s who made their way to the music room to participate in the 40-minute get-together, were unbelievably good. In sync and in-tune they played with precision as they delivered a half-dozen examples of popular songs with a prowess one might expect from a group of 16-17 year olds. 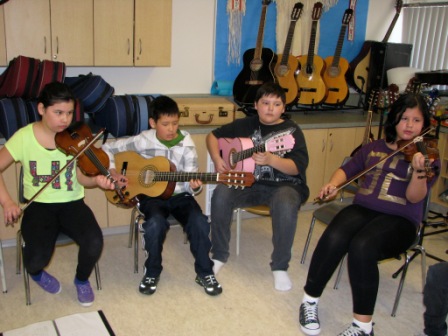 attending the school four years ago. “I have made some really good friends playing music and I enjoy coming to this class.” He said the music “inspired” him to do well in school, noting that “my marks are pretty good and I am happy with them.”

“Music class is my favourite class,” beamed 11 year old Autumn Swimmer, whose favourite musical group is One Direction. Clutching a pair of crutches to help her move about while she played her fiddle and mandolin, despite having a swollen ankle, Swimmer said, “I’ve been here at the school since kindergarten and I’ve learned a lot. My cousin Sam also plays and sometimes we practice together. Music makes me happy; I love to sing and play and I really enjoy learning new things, like playing the mandolin.”

Pop music fan Alex Paul is a Grade 5 student who also enjoys music. “I like it a lot,” he emphasized. “I like pop but I also like country music. It makes me happy to play for someone or even to practice because that’s the way you get better. I’ve made lots of friends in music class and maybe one day I will have my own band.”

Chante Okemow is in Grade 5 and a member of the music class for the past two years. She said music is fun, “especially when I play for my family. I also like to sing and play the fiddle. I also like to draw and will take an art course one day, maybe even go to art school. I like all types of music.” Her favourite group is the Irish boys band, The Wanted.

Nessa Quintal is an 11 year old Grade 6 student enjoying her 4th year in the music program. “I play the fiddle and the mandolin and I also sing in the choir; I love music,” she said. “I think music is awesome and that it is something I want to be involved in forever. My grandpa plays the fiddle and the guitar and my mom and uncle both play the guitar. I like cultural music and pop music about the same. I don’t really have a favourite band because I like every type of music really.” 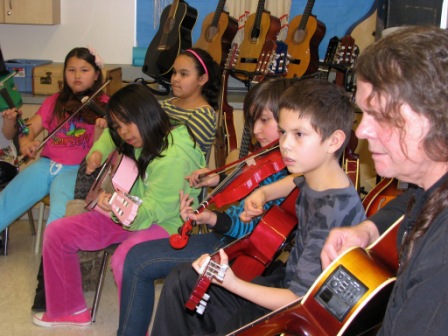 because it is calming and it makes me feel good,” smiled Sharphead. “I love to play for my family, especially the fiddle because that’s what I am best at right now. I like all types of music but I’d say that pop and rock and roll are my favourites. We are lucky to have really good teachers who are patient and make the class a good one to be in. I’m not sure what I want to do in the future; I love music and I also love art but probably something with music would be good.”

“These young people are making some real progress,” noted Garry Lee, a well known and long serving entertainer in the Edmonton region. “They work hard to accomplish their goals; they’ve always shown a keen interest in the music program and you can tell by their efforts here today that they are achieving something very special.”

Lee has been teaching music at Prince Charles on a weekly basis for the past ten years; he also teaches at Montrose Elementary (3rd year), Camilla School at Riviere Qui Barre (3rd year) and at the Pakan School at Goodfish Lake (2nd year). He also works on a part-time basis with Metis Child and will participate in St. Albert this year at the annual Poundmaker’s Lodge-sponsored Métis Spring Festival.
“I got into teaching about 12 years ago and have been with the Prince Charles music program for the past 10 years,” he explained. “Working alongside Judy is like a dream come true; she is an excellent and caring teacher and she’s always trying to improve on what we are doing. We constantly work together to improve ourselves and in doing that the students become our beneficiaries. I know that I have tripled my skills since becoming involved as a teacher of children, something that has allowed me to become both a better person and a better musician. I really enjoy sharing my talents with these young students and they show their appreciation by excelling in school.”
Prince Charles School serves the Aboriginal community in Edmonton north of the river. Approximately 10 percent of the students who attend the school actually live in the community. The remaining 90 percent come to school by bus from 51 different school catchment areas to attend the Awasis Urban Aboriginal Program.

All K-6 students are provided with a hot lunch through the Edmonton City Center Church Corporation and parent contributions. 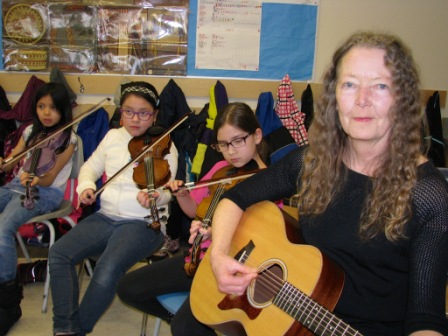 Community partnerships with the Family Centre, Bent Arrow Society, Uncles and Aunts at Large, and Urban Spirit Rotary Club have been established to support students and families.

The school’s young musicians have been treated to various opportunities-of-a- lifetime, the most recent (March 5) when they performed before a sold out audience at the Jubilee Auditorium as a part of the Edmonton Public Schools’ Night of Music. Approximately 870 student musicians, led by 31 music teachers and 13 teacher-conductors came together to share their musical expertise with parents, families, sponsors and community members.

“The applause they received, including a standing ovation, was a wonderful thing to see,” smiled Gatto. “It is such a great self-esteem builder and these kids were overjoyed at the reaction they got from everyone who attended the event. They were so pleased and I know that their parents and grandparents are very proud of them; they were amazing!”

Four months of preparation and two months of practice preceded the event. And that’s not the only performance the student musicians have attended. They’ve also joined the Edmonton Symphony Orchestra for two performances, participated various times in the Heart of the City Festival and entertained Elders and others at the Native Seniors Centre. They’ve also participated in National Aboriginal Day outings, played at Fort Edmonton Park, and during a Minister of Education event at the Edmonton Art Gallery.

“They’ve also played at Capital X, at the Consort Gun Show and Music Jamboree, at NAIT’s Aboriginal Awareness Week celebrations. at a First Nations conference in Sherwood Park and various other venues,” noted Gatto. “Needless to say, we are all very proud of them and their achievements.”

Next up for the Prince Charles music students is a trip to the March 27-30 National Event being held in Edmonton’s Shaw Conference Centre by the Truth and Reconciliation Commission.

“Dr. Maggie Hodgson heard our group perform last spring at the Aboriginal conference in Sherwood Park,” explained Gatto. “She was moved to tears by hearing the group and seeing their confidence and joy. She contacted Garry and me and has worked tirelessly to get us financial support and important performance opportunities, including the Truth and Reconciliation Conference and a filming opportunity with CBC on March 25th. Maggie was instrumental in connecting us with The Manaaw Seva Association who have made a generous donation to the program and a probable commitment to ongoing support. We are very grateful for this support and to the families who have made the commitment to buying instruments and to the children who often use their allowance to make instrument payments.”
Prince Charles School is located at 12325 – 127 Street in Edmonton.