Francis Whiskeyjack was born on east-central Alberta’s Saddle Lake First Nation on Saturday, June 26, 1948. Educated in the school of hard knocks and in elementary schools in Alberta’s rural communities, Mr. Whiskeyjack completed his Grade 12 education in Edmonton before committing himself to the principle of lifelong learning.

“As a traditional person,” noted the well-known and highly respected Elder, “I strive to walk a balanced, holistic path and live by the teachings handed down to me from my Elders. My biggest mentor, Joe P. Cardinal, once told me that to live a good life, a full life, you have to love, show kindness, share, care and practice self-discipline. You have to challenge yourself to make good choices on life and be strong in all respects of spirituality, physical and mental stability and emotional well-being. What he was saying is that if you are strong you will survive; if you are  weak you will not. You have to find your strengths, realize what they are and utilize them in the right ways. He taught me that I must accept the things I cannot change, but encouraged me to work within the boundaries to seek alternative solutions.” 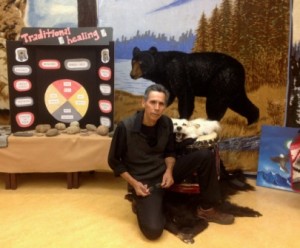 Elder Francis Whiskeyjack has been guiding Amiskwaciy Academy students in the ways of the Medicine Wheel for the past 13 years. Story and photos by John Copley

Employed by the Edmonton Public School Board,  Francis Whiskeyjack wears a coat of many colours at Amiskwaciy Academy in his capacity as Elder, traditional art, song and Cree instructor and Community Cultural Resource Advisor. He has been with Amiskwaciy Academy for the past 13 years. Fluent in both English and Cree, Francis is also an Adjunct Professor and Cultural Advisor at the University of Alberta.

“Francis is an extraordinary man and an extremely valuable asset to Amiskwaciy Academy,” assured Principal Fred Hines. “He is resourceful and knowledgeable and he shares his wisdom in ways that really make a positive difference in the school. The teachers look up to him, the students respect him and the community loves him. Francis is involved in every aspect of day-to-day activities and he is always available when students need help, require mentoring, or seek advice on both school and/or personal matters; his guidance and input are crucial and one of the reasons our students are doing so well.”

His extensive knowledge of the Medicine Wheel, Aboriginal culture, tradition and history and his ability to utilize traditional healing techniques have cast Francis Whiskeyjack as a reputable, respected and trusted Elder throughout the Aboriginal community and beyond. His knowledge and abilities have often proven to be valuable to institutions that include Alberta Health, the Edmonton Public School Board, Grant MacEwan University, the University of Alberta and others.

A Residential School survivor, Elder Whiskeyjack comes from a background that includes personal healing, health care promotion and cultural studies. An advocacy worker who goes the extra mile to help others through times of turmoil, Francis is a tireless and committed worker whose sincere desire to work on behalf of Indigenous people has earned him many accolades and tremendous respect. During our conversation he spoke about such things as trust, faith, life, residential schools and addictions abuse issues. He spoke about the significance of life and the important role that the simple things, the things we all take for granted, play in our lives. He spoke about the important role that water, soil, plant life and marine habitat play in our ability to thrive and he touched on subjects that included the environmental imprint that humans leave on the planet. His passion for language retention, freedom of spirit, pride of culture, clean living and responsible action are evident in every word he speaks. He has a passion for protocol, tradition, storytelling and the preservation of Indigenous languages. He understands the challenges that Aboriginal people face in an urban environment and realizes that modern technology has taken its toll, especially for those who doubt the old-school way of thinking and acting. He also spoke with pride about the role that both he and Amiskwaciy Academy play when it comes to educating and enlightening others about Aboriginal culture and tradition. 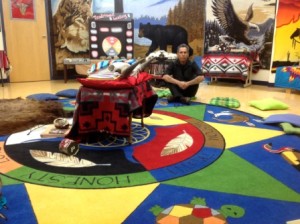 Elder Whiskeyjack’s input and perspective is treasured by students, staff and the community.

“Working with Amiskwaciy in the sharing and promotion of Aboriginal tradition and culture brings me great joy,” he explained. “I visit and speak to students and staff in about 20 different schools each year and the waiting list continues to grow. I am often asked to share our culture with students throughout the region; it is something I truly enjoy because sharing knowledge is essential and also rewarding for everyone.

Francis visits many schools throughout the year; some of the topics he covers include such things as the benefits of circle teaching, holistic healing, the sharing circle, tipi teachings, the sacredness of pipe ceremonies and Aboriginal protocol. He also talks about the buffalo, eagle, bear, and wolf and the roles they play in Aboriginal culture. He discusses the four directions of the Medicine Wheel, the four earthly elements – wind, fire, water and air – and the importance of physical, mental, emotional and spiritual wellbeing.

During his 13 years at Amiskwaciy Academy, Francis Whiskeyjack has used the Medicine Wheel as a tool for both learning and teaching.

“The Medicine Wheel has always been one of the most important and positive forces in my own life and it is something that I enjoy sharing with others,” he explained. “These teaching are based on what I’ve learned from the Elders in my home area; many people have different interpretations of the Medicine Wheel and those differences are usually related to where a person is from and what tribe he or she belongs to. There are no rights or wrongs only different perspectives.” 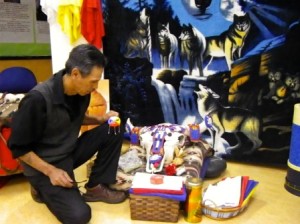 Francis shares his wisdom and his insight with others and offers these comments.

In the centre of the circle I like to put the Creator’s name, because without the Creator nothing would exist,” he sad. “The wheel has always been in direct relationship with the Creator. Right under the Creator I put me, because I need to do things for myself in order to make this wheel work. Within the circle are the four quadrants or areas. A lot of people know them as the four directions. The number four has many significant meanings for the Aboriginal people. Within the four directions there are all the sacred teachings of four.

“In the universe there are four directions – east, south, west and north. There are four winds; four seasons – spring, summer, fall and winter; four races of people – the oriental, the red man, the black people and the white people; four types of creature that breathe – those that fly (birds), those that are four-legged (the buffalo), those that are two-legged (man) and those that crawl (insects).

“There are four elements on earth – wind, fire, water and air. The directions used in the wheel are always used in a clockwise direction because that is the way the sun moves, rises and sets. First of all I’m going to put in the quadrant, which is the east, where we are born physically. We are babies then. Our physical selves begin when we are born. 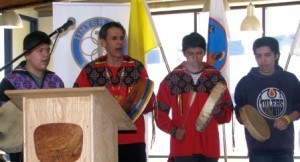 Elder Whiskeyjack participates in school ceremonies with the student drummers

“Then we go on to the next quadrant which is the south, on to the mental area…when we get to the teenage years we start to use our mind a lot more.

“We get to the next direction which is the west, where there is the emotional part of things…sadness or hurt is represented.

“The last link in this fourth quadrant is the spiritual self. When people get older they tend to get more into their spirituality. A lot of times we may be taught spirituality when we are younger, but we often feel that we do not need it then.

Elder Whiskeyjack shares this and much more knowledge about the Medicine Wheel, including the importance of the four directions, colours, plants, herbs, roots, animals, birds and more, with the students he teaches and in the seminars and workshops he delivers to schools and organization’s that seek his input.

“Sharing knowledge is a wonderful thing,” he said, “and to be able to share that knowledge with classrooms full of students is very special to me and something that I hope to be able to do for many more years to come.”

Be the first to comment on "Amiskwaciy Elder Francis Whiskeyjack shares his wisdom, guidance and culture"