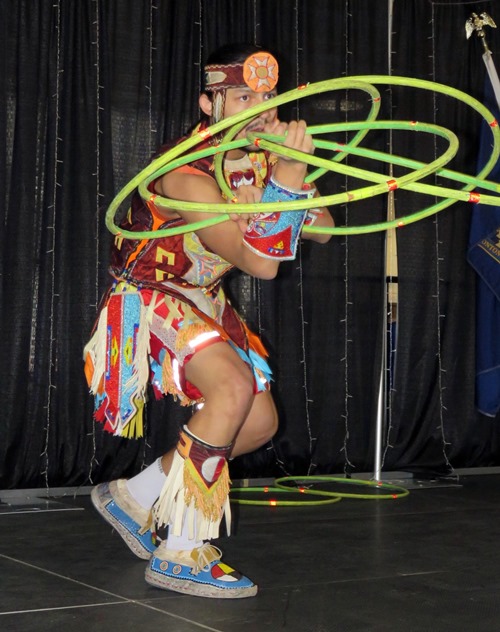 (ANNews) – Amiskwaciy Academy’s 2017 Spring Feast took place at the school on Thursday, April 27, and was followed a day later with a very special Lost Prizes Conference.

“It was an interesting and educational week,” noted Principle Fred Hines, “and once again we are pleased to see so many of our community sponsors, friends and colleagues come out to enjoy the feast and celebrate the season.”

This year’s feast was also designed as a multicultural celebration in recognition of Canada’s 150th birthday. Amiskwaciy Elder Francis Whiskeyjack offered a prayer, thanked the full house for attending and spoke briefly about the significance of spring and the importance of sharing and caring for one another, especially through difficult times. 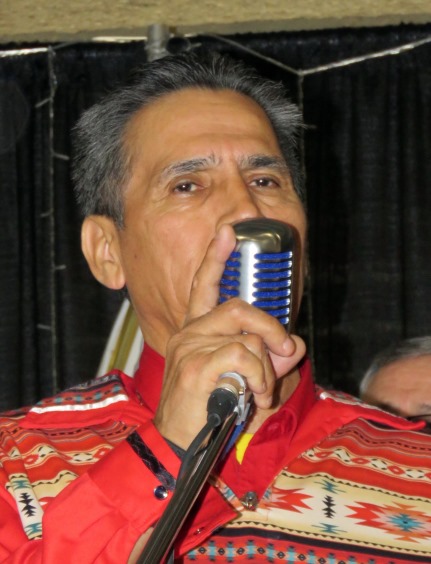 Elder Francis Whiskeyjak led the morning prayer and drum song before talking to the audience about the significance of the new spring season.

After acknowledging the Elders and introducing Edmonton Public Schools Vice Chair Ray Martin and Trustees Nathan Ip (Ward H) and Cheryl Johner (Ward A), Principle Hines noted the presence of three “special friends from the University of Winnipeg – the Dean of Education, Dr. Ken McCluskey, Phillip Baker, Director of the University’s ACCESS Program and Alan Weibe, a Professor with the ACCESS Program. These three gentlemen, along with colleague, Donald Treffinger, who was unable to attend the feast, co-authored a book entitled “Lost Prizes: Identifying and Developing the Talents of Marginalized Populations.”

Ironically, the attendance and participation of the three university scholars came exactly one year after Amiskwaciy Academy received a visit from Dr. Annette Trimbee, the seventh president and vice-chancellor of the University of Winnipeg, who came to the school and spoke with the students about setting goals and completing their education.

Hines lauded the efforts of all the community sponsors and gave a special nod of recognition for the “outstanding and continued support” from everyone involved in helping to ensure that Amiskwaciy Academy’s students have every opportunity to succeed. 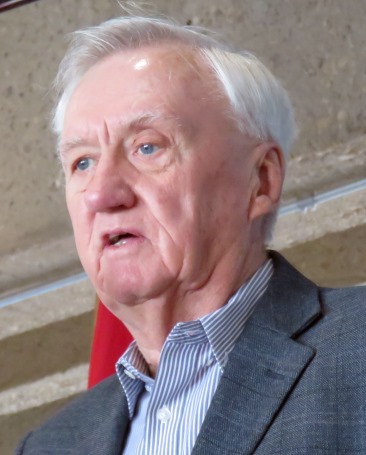 Edmonton Public Schools Vice Chair Ray Martin addressed the gathering and began by saying how pleased he was to “be here today to represent the EPSB and to celebrate the birth of a new season and new life.”

Martin said it was “especially pleasing to see so many community partners and so many other schools attending today. This is a wonderful opportunity to meet and greet one another but more than that it is an opportunity to learn more about each other as you realize that we are all connected.

“Amiskwaciy Academy is a unique place that brings together Cree language, culture, tradition and knowledge in a positive and quality educational setting. Amiskwaciy’s teaching styles reflect that belief through the involvement of Elders, community partners, family and teaching staff that help to create a holistic learning environment. These values reflect and support those of the EPSB as we work together to turn the learners of today into the leaders of tomorrow. Spring is truly a time of renewal and growth – like today’s ceremony, built on the strong, rich traditions of the past, but that also celebrate the future, the potential of new life and the opportunities to come.” 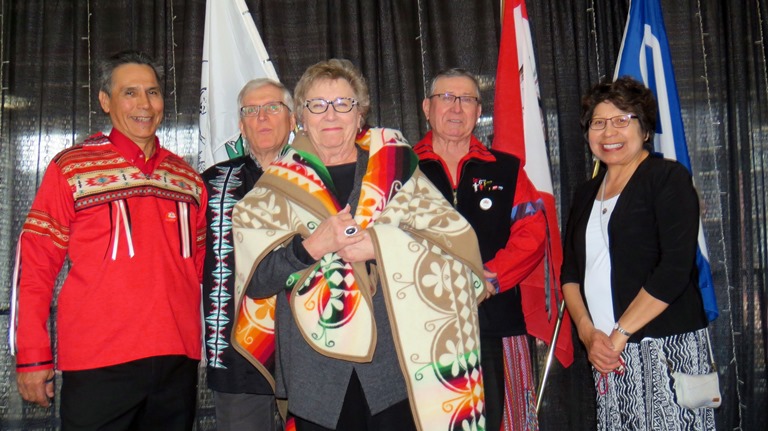 Amiskwaciy Academy likes to thank those who make a positive difference in the lives of the students and as such it has a tradition of giving back with a special ‘thank-you’ to those who are making a difference. The spring event included the presentation of a beautiful blanket to Louise Hayes, an active Amiskwaciy Academy supporter and a member of the Alberta Government’s Aboriginal Relations team. She has spent the majority of her career working with Metis and First Nations people across Canada.  Louise has served several volunteer organizations including the University of Alberta Board of Governors, the University of Alberta Senate, the Council of Aboriginal Initiatives and is currently a board member of the United Way Alberta Capital Region, Boys & Girls Clubs Big Brothers Big Sisters of Edmonton & Area, the Chair of the Edmonton Public Schools Foundation, Co-Chair of the Chief’s Advisory Council of the Edmonton Police Service and a shareholder at Northlands.

The day after the feast the three Manitoba educators hosted a day-long conference that incorporated four different breakout sessions and introduced seven presenters. A morning prayer and song by Elder Whiskeyjack was followed with welcoming remarks from Fred Hines. 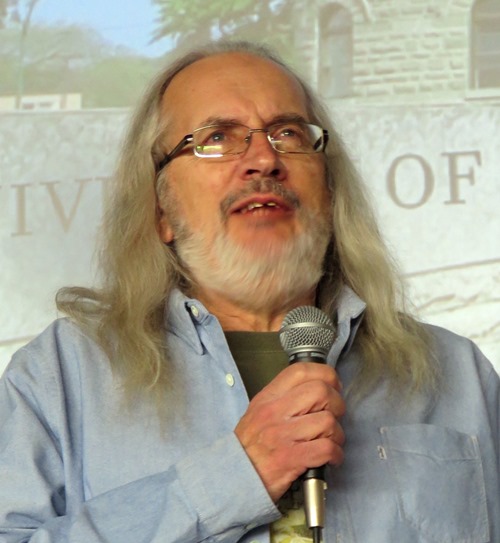 Dean of Education, Dr. Ken McCluskey then spoke about the development of the “Lost Prizes” book co-authored by the four educators. He delved into the messages and lessons discussed in the manuscript and offered personal insight into the content of the book and how it can help educators embrace different philosophies and teaching styles that improve student learning and behaviour.

“Lost Prizes: Identifying and Developing the Talents of Marginalized Populations” offers educators valuable and insightful reading in a whole-package approach that encourages ongoing engagement with students and deals with the positive consequences of making a positive difference in the lives of disadvantaged people. Topics include – the challenges and cost of underachievement; clarifying “at-risk” terminology; basic principles of intervention; foundational models that have guided the “Lost Prizes” approach; a review of Manitoba programs and the evolving “Lost Prizes” approach and programs.

Four one hour-long breakout sessions took place and included presenters Alan Wiebe and Melissa Harder (Mentoring for the Development and Resilience and Self-Esteem); Philip Baker and Lisa Neufeld (The Voices of Lost Prizes: Reclaiming teachers of the future through an Alternative Education Program); Nadia Sadik and Chandra Hildebrand (Reluctant Readers: How to Engage All Readers, a toolbox for teachers) and Fred Hines (Engaging Community Partners: Implementing Wrap-Around Services in Your School). 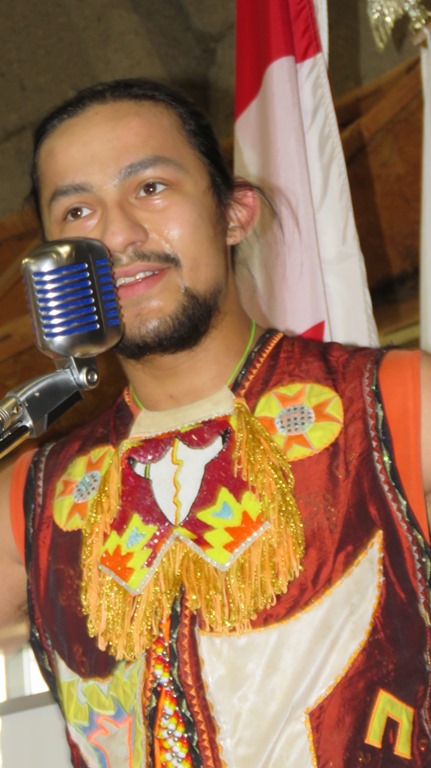 Amiskwaciy Academy is an Edmonton Public School program of choice that provides solid academic programming within an Aboriginal context. The school, which is open to students of all backgrounds and cultures, honours the Aboriginal community and reflect its cultures, values, ancestral knowledge and traditions in achieving excellence in education. In doing so it provides, with the help of school and community Elders, a meaningful and balanced curriculum, bringing together the uniqueness of Aboriginal cultures, knowledge and languages in a positive and quality educational setting.

Culture is the core of everything that takes place at Amiskwaciy Academy. Working extensively and in close contact with on-site Elders, the school’s administration maintains close partnerships with the Cree, Stoney and Metis communities in and around the Capital Region.

The Academy maintains an on-going cultural exchange program with a number of Edmonton-area Elementary Schools and has partnerships with various educational institutions, including the University of Alberta, NAIT, MacEwan and the University of Winnipeg.