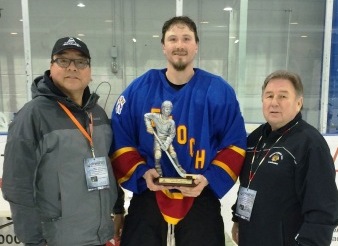 The Enoch Recreation Centre in Treaty Six Territory was a hub of excellence from March 27-29 during the LWC XV-15th Anniversary TOMAHOCKEY Tournament. The excitement was high, the competition was fierce  and the camaraderie was strong as two divisions battled with 8 Rec and 6 Masters Teams participating.

Both teams in the Sr Rec and Masters divisions hailing from Alberta came from behind and played three games back to back on Sunday March 29,  to capture the coveted LWC Championship title. In the Sr Rec All Reserve Division it was the Enoch 440 team that battled back from the B side of the draw to defeat defending champions Witchekan Lake Bisons by a score of 5-3 in the A-B final. 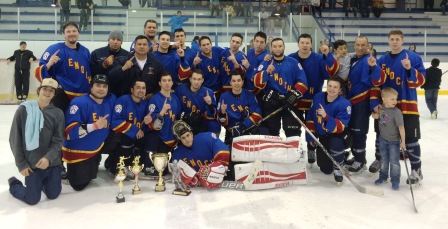 After a stellar tournament, the ENOCH 440 team was named LWC XV Champions

Enoch squeaked by Peter Ballantyne earlier Sunday by a score of 2-1 to earn a berth to the championship game. Witchekan Lake Bisons had easily handled all their opposition cruising as winners of the A side before meeting the high flying Enoch 440 squad. The Enoch team had the momentum going in their favour and the Bisons could not stop the avalanche lead by former Medicine Hat Tigers forward  (Tampa Bay Lightening draft pick) Darren Reid. 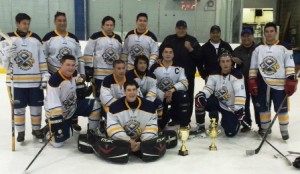 “Enoch simply had the momentum and the loud home crowd on their side in the old barn,” said LWC Founder and organizer Milton Tootoosis. “With some stellar goal tending by Blake Morin, a few good bounces and it was all over,” he added.  With Saskatchewan star forwards Trent Campbell and Aaron Starr, the Witchekan Lake Bisons raised the bar and the much anticipated final by the two reserve teams.

“The game could have gone either way with so much offensive power, speed and solid goal tending,” said Tootoosis. “In short tournaments like this anything can happen in one game finals,” he said.  Reid (pictured at the top of this article) was chosen the MVP for the Sr Rec Division. 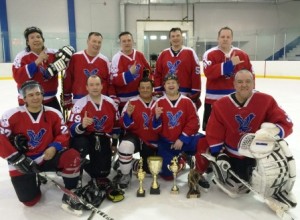 In the masters division it was Saddle Lake Warriors upsetting the Playboys in the A-B final. Mike Ball lead the Warriors with a three goal performance in the one game winner take all final. The Playboys lead by Jason Ahenakew and Dean Gerrard could not connect enough to finish off what appeared to be a sweep after easily winning the A side and trouncing the Warriors earlier on Sunday morning. Ball was chosen MVP for the masters division. 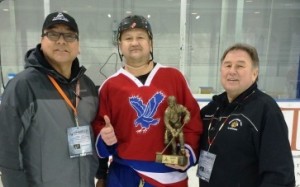 Mike Ball was chosen MVP in the Masters Division

This was the first time the LWC tournament was taken outside of Saskatchewan borders after moving it around that province over the past fourteen years. “Moving the event to Enoch this year proved a big hit for Saskatchewan teams,” explained Tootoosis. “Seventy percent of the clubs travelled from Saskatchewan to Enoch this year which proved that the River Cree Resort and Casino and Edmonton is a much desired destination and a nice change.”

The LWC committee is already planning for LWC XVI and a location will be announced in the months ahead. Team managers, players and fans are encouraged to visit new web site www.lwctomahockey.com