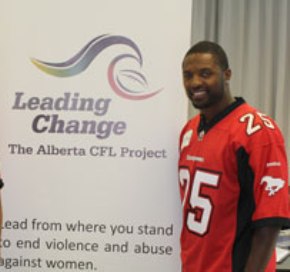 ALBERTA – The ‘Battle of Alberta’ took a breather last month as the CFL’s Calgary Stampeders  and Edmonton Eskimos put aside their rivalry and teamed up against domestic violence and abuse against women.

The two football clubs are partnering with the Alberta Council of Women’s Shelters (ACWS) under the organization’s Leading Change banner for this newest offshoot, Leading Change:  The Alberta CFL Project.

As part of this program, select CFL players and university coaches underwent three days of intensive training in gender-based violence prevention and the `Bystander Method’ in partnership with Jackson Katz, Phd, gender activist, educator and founder of MVP Strategies (Mentors in Violence Prevention), a program engaging youth through sports.

The program centers on a belief in the power of peers to create social change, employing the Bystander Method adapted by MVP to empower youth with this leadership.  The focus will be on promoting respectful relationships, and recognizing and interrupting inappropriate and abusive behaviour. 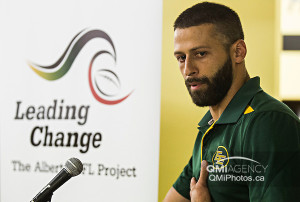 Edmonton Eskimo Quarterback Mike Reilly participated in the training and commented, “I have a lot of very special and important women in my life, as everyone else does too, so it’s a great opportunity to use the platform of being a professional athlete in Edmonton to try and make a change for the positive.”

Now equipped with this knowledge, players are eager to share the messages with young athletes, students and coaches.  The CFL project aims to perform 50 school and on-reserve community presentations per year.

Randy Chevrier, Long Snapper from the Stampeders shared, “training was great! We all feel like we learned so much, we can’t wait to start sharing what we have learned.”

The CFL and ACWS are reaching out to schools, coaches and sponsors to provide a space for these presentations and accommodate the need to motivate teens and young adults to “lead from where they stand” to create change.

If you or your school are interested in hosting a workshop and joining in the efforts to stop the cycle of violence and abuse, please contact Christie at ACWS (780) 456-7000 ext222.

“We’ve learned that to truly make change, programs needs to be sustained and audiences need to be approached from many different avenues,” says Jan Reimer, Executive Director of ACWS.  “Training adult mentors to provide bystander education to youth coupled with public awareness messaging delivered by male leaders is bound to have a positive impact.”

Len Rhodes, President and CEO of the Edmonton Eskimo Football Club further reinforced the team commitment to the Leading Change Project.  “In January 2014, I made a public commitment on behalf of the Edmonton Eskimos that we would be partners in the Leading Change Project.  I am very proud of the fact that some of our players have pledged to be actively involved in educating men and boys on ending violence against women.  As role models, our Esks players will be key influencers in paving the way to change throughout our northern Alberta community”.”

“As a husband and a brother I am so proud to be apart of this project, this is something our team takes very seriously,” said Anthony Parker, Wide Receiver for the Calgary Stampeders.

ACWS acknowledges the Government of Alberta, Human Services for the funding to help kick-start the program this season, as well as the Edmonton and Calgary Telus Community Boards for supporting the online presence of the Playing to Win and CFL Project tools.

The ACWS is a province-wide, voluntary organization supporting women’s sheltering organizations and their partners through education, research, and services for the benefit of abused seniors, women and their children. ACWS also conducts public awareness to end domestic violence. In Alberta, 5,646 women and 5,480 children accessed emergency shelters between 2012 and 2013. Another 27,000 were turned away (Alberta Provincial Shelter Data 2012-13). See the linked Backgrounder for more information about the program and ACWS.